They are facing Vance Worley. And yes, he’s had a few good games and he has talent. But if this is a World Series preview then guess what? The Red Sox will have to beat an elite pitcher or 8.

How’s about teeing off on Vance Worley?
And John Lackey… do yourself and all of us a favor: Don’t suck.

I’ve been brutal on the Mets both on my blog and the podcast.

I wondered how a team in New York could be losing money, putting a non contender on the field and be an absolute mess.

And I predicted that they will have a firesale and lose 90 games.

Now I stand by most of those statements.
But I have to give Terry Collins some credit.
He has been handed a crappy hand (and the aftermath of the Omar Minaya years) and has the team over .500.

He doesn’t have David Wright nor Johan Santana at his disposal. And the line up and bullpen has been patch work.

Just last night the Mets had Willie Harris at DH, Lucas Duda at first base, Justin Turner at second base and Josh Thole at catcher. That’s a lineup you’d expect at a split squad spring training game.

And they throttled Detroit to the tune of 14 runs. And that’s not a chump team. That’s a first place team they blew out of the water on the road.

I don’t know how much longer this will last. I still think Reyes and Beltran and Rodriguez are going to be dealt in a month (and why not? They could get three valuable and cheap building blocks for them.)

And it is unlikely that they will leapfrog five teams for a playoff spot.
But if they split the next few games, they will be at the official half way spot with a winning record… and that’s more than I was expecting.

And if I can give the Pirates, Nationals, Diamondbacks, Indians and Mariners all credit for exceeding expectations, then I suppose I should for the Mets as well.

Things could be worse for the Mets. They could be the Dodgers. 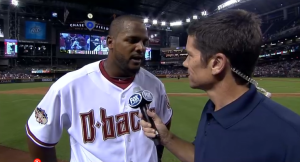 The Diamondbacks won a heartstopping game against the Indians. The Tribe had a wonderful comeback in the 9th but with 2 outs in the bottom of the 9th up stepped Wily Mo Pena.

I never hated Wily Mo Pena. I just hated the trade. There was no reason to trade Bronson Arroyo for a backup outfielder. I said it then and I say it now.

Ah well… so Pena went from the Reds to the Red Sox to the Nationals… then out of the bigs in 2009 and 2010… off to Buffalo and Columbus and independent Bridgeport… then to Portland and Reno.

Now at 29 years old he is in Arizona and watch him become the very player Theo imagined when he shipped off a decent starting pitcher who has given the Reds some All Star numbers and a lot of innings eaten.