During the All Star break it was standard to look at the Pirates and say “they are a nice story but they will fade in the second half.”

Well as we wake up this Friday, the second to last weekend of July and with August just around the corner, the Pirates are still tied for first place.

Cincinnati takes on the Braves while the Brewers head off to San Francisco.

All three series are competitive but the Pirates being at home and throwing Maholm, Correia and Morton means they have a good shot at winning this series.

If they can survive this weekend and stay at least tied for first, then things will REALLY get interesting.

They head to Atlanta and Philadelphia and play 2 of the three teams that I think have the best shot of winning the World Series and they’ll do it on their turf.

The other of the three potential World Series teams are the Giants. They play them the second week of August.

It’s a gauntlet and the next few weeks they won’t have a day off until August 11th.
That’s a 20 game stretch.

If they can hold their own and go 10-10 or better in that time frame, then this might indeed be a contender.

If not, well then go for the 83 wins and go for the winning season.
Pirates had the day off yesterday. The 20 game stretch to redeem 18 years of losing begins…. NOW! 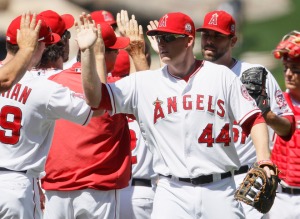 Late last night, I thought the Angels season was about to collapse.
The team I picked to not only win the AL West but also the team whose starting pitching I predicted before the season began would win the pennant was about to fall 6 games back of the Texas Rangers.

The defending American League champs were about to make it 13 straight wins with a chance at a 14th win this afternoon and push the Angels an entire week back in the Division.

I saw the score, checked the game on TV and thought “this could be really bad for the Angels.”
It’s tough to make up a week of games. And with the Rangers running on all cylinders, I felt like my pick was slipping away.

Then it happened. By “it” I mean the 6th inning. In one of those “What?” moments where something out of the blue pulls the rug out from you (like when I saw the first Pirates of the Caribbean movie and realized it was actually good) the Angels got off the damn mat and scored 6 runs.

They had scored 6 runs the previous 34 innings and then doubled that in one frame. An 8-3 Rangers whuppin’ turned into a 9-8 Angels win.

And today they withstood a wonderful C. J. Wilson game to win 1-0.

I’ll tell you what else they withstood.
A 12 game winning streak by Texas.

Texas went on a run where they couldn’t be beat and when it the dust settled, the Angels are a mere 3 games back.

The Rangers were world beaters but couldn’t shake the Angels.

The difference between 3 and 7 games is magnified when you look at what is coming up.
The Angels head to Baltimore, who are falling apart and will probably be a series win for the Halos.

The Rangers host Toronto, who is as hard to figure out a team as there is in baseball. They might sweep the Jays. The Jays may show up and give them a hard time. Jose Bautista hitting in Texas is a pretty thing.

But more importantly, the Rangers are heading into August.
How have the Rangers done in August?

In other words a modest Angels winning streak could put them within a game of first.
In other words if the Angels get another bat and another reliever before August, my picking them won’t look so bonkers.

And isn’t that why they play the games? To make ME look good?

Normally I’m not very happy when the Rays win. I’m not a Rays fan and frankly I don’t want them getting TOO good. They can pass the Yankees, but I’m not looking for a repeat of 2008!

That being said, anytime CC Sabathia throws a solid complete game and LOSES is a good day for me.

The Sox are now 2 games ahead of the Yankees and heading back home to face the Mariners.