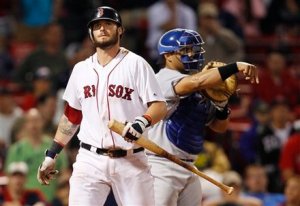 For the people who STILL think the job of a hitter is to “get on base” may I please present last night’s 14 inning Red Sox loss to the lowly Royals and the Yankees win over the Mariners.
The Red Sox got 13 hits and 3 walks. 16 men got on base for Boston last night.
The Yankees got 11 hits and 3 walks. 14 men got on base for New York last night.
So if you take the point of view that the batter’s job is to get on base, then the Red Sox had a more successful night than the Yankees.
OK, granted the Red Sox played an extra inning game so they had more chances to get on base. But more Sox players did their job than Yankees players. You can show me as much on your Fantasy Baseball team.
Would ANYONE in their right mind say that the Red Sox had a more successful night offensively than the Yankees?
Of course not. Because the batter’s job is to PRODUCE RUNS!
Getting on base is one way to do it, but it isn’t the only tool in the shed.
Marco Scutaro got a basehit that improved his average, on base percentage, WAR, VORP, OPS+, total bases and 100 other stats I don’t understand… and walked back to the dugout with his head hanging low because he got thrown out at second right after botching a game winning squeeze play.
Last night’s loss was just stupid.
The Red Sox left men in scoring position in the 2nd, 3rd, 5th, 9th, 11th and 13th.
And that DOESN’T include Josh Reddick being at third with one out in the 12th against someone named Louis Coleman.
If you think that getting on base is the main job of a hitter, then by definition you must consider those 7 innings mentioned above to be a success.
I looked at the scoreboard.
The Red Sox lost to a lousy Royals team.
And my teeth are grinding.
DODGED BULLET GAMES – 33

April 5 – 3-1 loss in Cleveland. (The Sox drop their 4th straight as the bats are dead in Cleveland.)
April 7 – 1-0 loss in Cleveland. (Sox blow a great Lester performance on a squeeze bunt and Darnell McDonald overrunning the bag to end the game.)
April 12 – 3-2 loss to Tampa Bay. (A solid Lester performance is wasted as Kyle Farnsworth of all people shuts down the Sox.)
April 15 – 7-6 loss to Toronto. (Bobby Jenks implodes with a 4 run seventh inning as the Red Sox waste Pedroia and Youkilis homers and a clutch RBI double by Scuatro.
April 19 – 5-0 loss in Oakland. (Pedroia gets picked off, the Sox bats go dead and waste a solid Lackey start.)
April 26 – 4-1 loss in Baltimore. (Buchholz pitches tentatively and the Sox let Kevin Gregg of all people to close out the 9th.)
April 27 – 5-4 loss in Baltimore. (The Sox tie the game with a 3 run 8th only to have Bard lose it in the bottom of the 8th.)
April 29 – 5-4 loss to Mariners. (Bobby Jenks blows a 7th inning lead, wasting 2 Mike Cameron homers.)
April 30 – 2-0 loss to Mariners. (The Sox strand 11 runners and let Milton Bradley double home the go ahead run.)
May 4 – 5-3 loss to Angels. (7 hours with rain delays and stranded runners. Marco Scutaro was thrown out at the plate in the 12th)
May 10 – 7-6 loss in Toronto. (8th and 9th inning heroics, including a homer by Adrian Gonzalez, are undone by a walk off sacrifice fly by David Cooper.)
May 21 – 9-3 loss to Cubs. (Up 3-1 in the 8th inning, the bullpen and defense implode. The Cubs score 8 runs while both teams wear their 1918 uniforms.)
May 23– 3-2 loss in Cleveland. (The Sox blow a 2-1 8th inning lead when the Indians rally with 2 outs. Crawford ends the game on a double play.)
May 29 – 3-0 loss in Detroit. (Verlander keeps the Sox off base and prevents the sweep.)
June 1 – 7-4 loss to White Sox. (Konerko drives in three, spoiling a game tying Ortiz homer.)
June 14 – 4-0 loss in Tampa Bay. (Wakefield’s solid outing is spoiled. Longoria scores on a passed ball.)
June 18 – 4-2 loss to Milwaukee. (The Brewers hit three homers early off of Lester and hang on.)
June 21 – 5-4 loss to San Diego. (Ortiz hits a double play in the 9th to stifle a potential winning rally.)
June 24 – 3-1 loss to Pittsburgh. (The Red Sox strand 7 runners in scoring position.)
June 25 – 6-4 loss to Pittsburgh. (The Red Sox fall out of first as Pedroia’s error leads to a Pirates run.)
June 29 – 2-1 loss in Philadelphia. (Vance Worley duels John Lackey and slumping Raul Ibanez drives in both runs.)
July 4 – 9-7 loss to Toronto. (John Lackey’s miserable start puts the Sox in too big a hole to climb out of.)
July 19 – 6-2 loss in Baltimore. (Scutaro gets thrown out stealing and the Orioles tack on 3 big runs late.)
July 25 – 3-1 loss to the Royals. (Scutaro botches a potential game winning squeeze play in the 12th as the Red Sox lose in 14.)

I’m not saying the Red Sox need to SWEEP every series. But they need to produce runs against teams like the Royals.

Why?
Because THAT IS THEIR JOB!!! 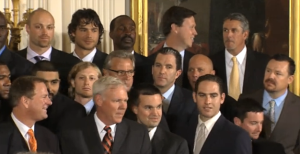 The Giants visited the White House yesterday. As always no matter who is President, the World Champion ceremony is always fun and a moment of celebration and shows a lighter side to the Commander in Chief.
But take your gum out of your mouth!
I know you are athletes and the Giants have the reputation of being rough around the edges.
And no doubt some of the players DIDN’T vote for Obama.
BUT TAKE THE GUM OUT OF YOUR MOUTH!
What the hell is the matter with you?
It’s the White House! You aren’t meeting a Fantasy Camp participant nor some guy Kayaking around McCovey Cove! It’s the President of the United States.
It doesn’t matter if it is Bush, Clinton, the other Bush or Obama.
Put your gum in the Zachary Taylor Memorial Spittoon and show a little respect!

Jason Keidel of CBS New York and contributor for WFAN joins me on The Sully Baseball Show to talk Yankee baseball, Derek Jeter and playoffs.

Listen in to the second hour of the Seamheads Baseball flagship show. 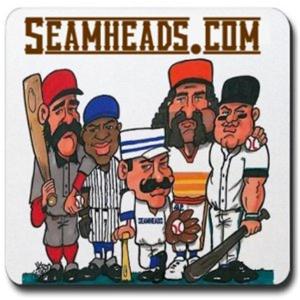