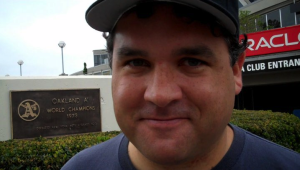 In the latest Sully Baseball video, I wax nostalgic for the greatest era in baseball history.
When would that be? The 40s? The 50s? The 80s of my childhood?
Nope.
When you look back at the flawed decades of the past, baseball might be at a high point of quality RIGHT NOW!
Don’t believe me?
Then check out the video.
And as always, you can check out the previous Sully Baseball videos by clicking HERE.
This video was shot around the Oakland Alameda County Coliseum (or whatever it is called now). As always, the video was directed and co-written by my wife Lisa.
If you like the videos, pass them around. 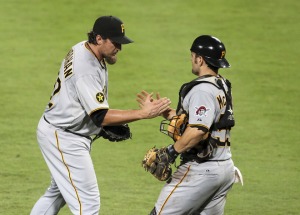 When a team loses a 19 inning game, it is heart breaking.
When they lose a game based on a horrible call that sparked a national controversy, then that can be agonizing.
When that team is fighting to stay near first place, it can be cruel.
And when that team is trying to change the culture of nearly two decades of sub .500 ball, there’s a lot of reason to think that could be the turning point back to Loserville.
Now throw on the fact that the very next night after the 19 inning marathon, the lost ANOTHER extra inning game, then maybe you’d assume that Cinderella’s carriage was turning back into a pumpkin.
But take a step back.
Don’t focus on the two losses and see that they won the first game and tonight’s game.
OK, show of hands, Pirates fans. How many of you would have taken a split of the 4 game series against the Braves IN Atlanta?
I am expecting a lot of hands up.
The Pirates whom everyone predicted would wither in the post All Star Game run against contenders are holding their own.
The only two losses against one of the truly elite teams could have easily gone the other way.
And with the Cardinals dropping their last two to the horrible Astros, the Pirates remain tied for second.
And the Pirates are tied in the loss column with the Brewers for the Division lead.
We are a few days away from it being August, and the Pirates are staying within range of the post season.
Tomorrow is their biggest test. They go to Philadelphia. They will play the VARSITY team of Pennsylvania baseball.
But so far, the Pirates have played half of the most important 20 Pirates games since 1992, and they split those 10 games.
Not bad for a fading team whose spirit should be crushed.