Going through my old baseball cards at my parents home, I stumbled across this one of former White Sox pitcher Dennis Lamp. (He had stops with the Cubs, the A’s and Pirates as well as pitching for 2 Division Winners with the Red Sox and having an 11-0 record with the 1985 Division Champion Blue Jays… but here he is a White Sox pitcher.)
It’s a 1982 Donruss card and frankly I don’t remember ever buying Donruss cards, but here it was in a shoebox.
Dennis Lamp was a good enough player. He pitched for 16 seasons and finished his career with a 3.93 ERA. He saved 15 games for the 1983 Division Champion White Sox.

And he had a kick ass mustache.

There is something odd, however on the back of his card.

Not his stats. Did you check his carrer highlights on the bottom of the card?
Look at the last line…

One of his hobbies is pantomime.

And what exactly does that mean? 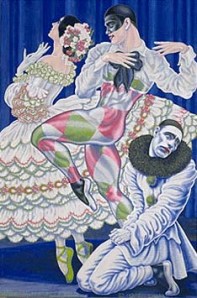 The art of pantomime can refer to a specific form of theater common in Europe. Usually performed in Christmas shows, it involves wildly exaggerated characters, dance and songs.

And lots of the people are dressed in those creepy Harlequin clown costumes that give us all nightmares. 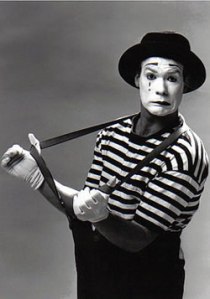 And of course the other possibility is he was a mime.

You know, those guys in the white makeup, dressed like a French stereotype and pretends to be in a wind tunnel or walking invisible dogs.

Either way it is strange.

Either way Dennis Lamp is either dressed in a Harlequin clown suit dancing about… or pretending he is trapped in a box.

Folks, that creeps me out.

I must get to the bottom of this.

Both the Giants and the Pirates have been stumbling.

The Giants have lost their last three series, including a sweep by the Reds, and allowed the Diamondbacks to have realistic playoff hopes.

Meanwhile the Pirates have dropped 10 in a row and turned their surprising playoff run and reenergized fan base into a collective screaming of “When do Steelers preseason games start?”

So a pair of slugs collided at AT&T Park and somehow the Pirates of all teams came to play.

And with Jonathan Sanchez pitching Game 3 of the series, the Giants had BETTER win tomorrow!

The Pirates have circumvented Lincecum and Cain… meanwhile the Giants had better send a nice big fat fruit basket to the Astros and the Dodgers for keeping the Diamondbacks at bay.

Arizona is tied in the loss column with the Giants.

The Giants are three in the loss column behind the Brewers for the honor of avoiding the Phillies in the Division Series.

If you nap too long you might be playing golf while the pennant goes through Arizona.

I would LOVE to see Tim Wakefield get win #200.

And I want him to get 8 more wins and become the all time leader for wins in Red Sox history.

And tonight he pitched well enough to win.

Instead Alfredo Aceves keeps boosted his bizarrely large win total. And what looked like what going to be a deflating loss on the heels of the Yankees victory became yet another come from behind win and another solid day for the Sox. And if the key is to win series, then taking the first game of a three game set on the road is a good step.

Time to update the tally.

April 8 – 9-6 win against the Yankees. (The Sox end their 6 game losing streak with a slugfest. John Lackey stinks but Phil Hughes stinks even more.)

April 10 – 4-0 win against the Yankees. (Beckett and Sabathia duel in a game that was 1-0 until the late innings.)

April 20 – 5-3 win in Oakland. (Red Sox survive a lead off homer and two bases loaded situations and facing the tying run at the plate to win their first road game.)

April 22 – 4-3 win in Anaheim. (Peter Bourjos makes a 2 run errors and the Red Sox survive a bizarre passed ball by Jarrod Saltalamacchia that let a run scored from second.)

May 1 – 3-2 win against the Mariners. (Ichiro loses a ball in the sun that turns into a 9th inning triple for Lowrie. Crawford singles him home for the win.)

May 8 – 9-5 win against the Twins. (Dice-K lets up 3 runs in the first but settles down as the Red Sox clobber Carl Pavano.)

May 9 – 2-1 win against the Twins. (A bullpen breakdown cost Beckett the decision but Cark Crawford ended the game with an 11th inning walk off hit.)

May 13 – 5-4 win in the Bronx. (Youkilis homers off of Joba and Bard and Papelbon make it more interesting than it needed to be.)

May 18 – 1-0 win against Detroit. (With 2 outs in the 8th, Salty doubles home Crawford from first for the only run. Papelbon gets himself in and out of 9th inning trouble.)

May 19 – 4-3 win against Detroit. (Bard blows Beckett’s lead but Carl Crawford wins it with a walk off hit.)

May 24 – 4-2 win in Cleveland. (Varitek throws two runners out and homers as the Red Sox win their first game against the Indians.)

June 3 – 8-6 win against Oakland. (Buchholz lets up 4 runs in the first but the Sox come back thanks to Carl Crawford’s 2 run single.)

June 30 – 5-2 win in Philadelphia.(An injury to Cole Hamels leads to the Red Sox bats waking up.)

July 5 – 3-2 win against Toronto. (Lester gets hurt but Darnel McDonald throws out the tying run at the plate to end the game.)

July 6 – 6-4 win against Toronto. (The Sox score 4 in the 4th to take the lead and Wakefield and company hang on for dear life.)

July 10 – 8-6 win against Baltimore. (The Orioles score 6 runs off of rookie Kyle Weiland in the second, but the Red Sox hit three homers in the bottom of the second to tie the game and hold for dear life.)

July 17 – 1-0 win in Tampa. (Beckett throws a masterpiece and the bullpen throws 8 amazing innings. But the Sox bats go dead, leaving 17 men on base before Pedroia drove in a run with 2 outs in the 16th inning.)

July 22 – 7-4 win against Seattle. (John Lackey beat Felix Hernandez and Mike Carp’s error helped the Red Sox score 5 in the 7th to give them some breathing room.)

July 23 – 3-1 win against Seattle. (Ellsbury gets Beckett off the hook in a tight pitchers duel when he got a 2 out, 2 strike 2 run go ahead single in the 8th.)

August 2 – 3-2 win against Cleveland. (Youk tied the game with a 6th inning homer and Salty dove home for the winning run in the 9th.)

April 7 – 1-0 loss in Cleveland. (Sox blow a great Lester performance on a squeeze bunt and Darnell McDonald overrunning the bag to end the game.)

April 12 – 3-2 loss to Tampa Bay. (A solid Lester performance is wasted as Kyle Farnsworth of all people shuts down the Sox.)

April 15 – 7-6 loss to Toronto. (Bobby Jenks implodes with a 4 run seventh inning as the Red Sox waste Pedroia and Youkilis homers and a clutch RBI double by Scuatro.

April 19 – 5-0 loss in Oakland. (Pedroia gets picked off, the Sox bats go dead and waste a solid Lackey start.)

April 26 – 4-1 loss in Baltimore. (Buchholz pitches tentatively and the Sox let Kevin Gregg of all people to close out the 9th.)

May 4 – 5-3 loss to Angels. (7 hours with rain delays and stranded runners. Marco Scutaro was thrown out at the plate in the 12th)

May 10 – 7-6 loss in Toronto. (8th and 9th inning heroics, including a homer by Adrian Gonzalez, are undone by a walk off sacrifice fly by David Cooper.)

May 29 – 3-0 loss in Detroit. (Verlander keeps the Sox off base and prevents the sweep.)

June 18 – 4-2 loss to Milwaukee. (The Brewers hit three homers early off of Lester and hang on.)

June 21 – 5-4 loss to San Diego. (Ortiz hits a double play in the 9th to stifle a potential winning rally.)

June 25 – 6-4 loss to Pittsburgh. (The Red Sox fall out of first as Pedroia’s error leads to a Pirates run.)

July 4 – 9-7 loss to Toronto. (John Lackey’s miserable start puts the Sox in too big a hole to climb out of.)

I had miscounted before…

Season Series with the Yankees won… more than a week of games taken from the jaws of defeat… and oh yeah.

I like Wakefield wins… but I LOVE Red Sox wins.