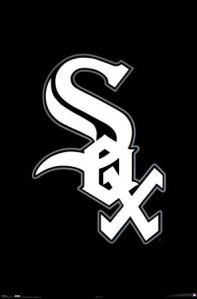 With about a month and a half left to the season, the number of legit playoff contenders are winding down. And the staff here at Sully Baseball decided to look at each contender and see what would be positive about their potential World Championships.

Which players or managers would benefit the most from a title. Which fan bases would savor it. And how the perception of each franchise would change slightly. Remember, this isn’t a numbers crunching site… this is all about emotion and things that strike my fancy.

The first potential World Series contender will be the Chicago White Sox. Why the White Sox? Because they are so unpredictable that they could either be in first place by next week or fall totally out of contention. So if I want to include them, I had better do it NOW!

would be good for baseball

But another World Series title, and this one with almost a brand new cast of characters would add to his luster that the team plays Ozzie’s brand of baseball. And when (not if) he takes over the Marlins and wins with them, he’ll get even closer.

The idea of Ozzie giving a Hall of Fame speech is a wonderful concept, if for no other reason than for the need of a 7 second delay. 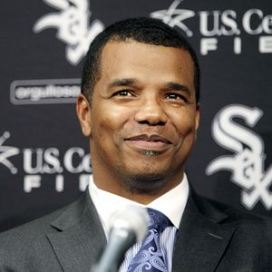 In an era of calculators, bizarre new stats and hoarding prospects, it would be nice to see Kenny Williams methods be rewarded again.

He’s always willing to bring in a free agent, even an ill fitting one. He’s willing to say “prospects be damned, we’re winning NOW!” And he has taken some chances in Cuba and by bringing up prospects super fast and throwing them into the fire.

Is it sometimes irresponsible? Sure. Does it blow up in his face sometimes? Ask Adam Dunn.

Is it cool to see a GM always trying? You bet.

And to see that GM win a SECOND World Series spitting in the face of convention… that would be too cool.

3. A Championship could justify the Adam Dunn signing

I mean he is so terrible right now that you have to wonder if he had a twin brother that he suited up in his place. And they’ve got 3 more years of this.

But imagine if he got a big hit in the post season. Or clubbed a big homer off the bench in the World Series. Then it would be kind of like J. D. Drew… an injury filled disappointment overall, but contributed big to a ring.

Besides, he seems like a likable accountable guy. I’d like to see him happy. (As if $56 million wouldn’t buy happiness.) 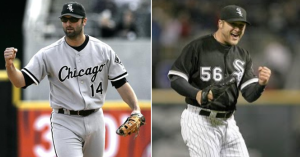 4. Multiple Rings will help people remember how to spell Konerko and Buehrle

I wrote a blog post that was basically a love letter to Paul Konerko and Mark Buehrle.

Guess what? I spelled in Kornerko every single time.

And I had to double check Buehrle whenever I typed it. I double checked it when I typed the previous sentence. Is it B-E-H? B-U-E? B-E-U?

None of it is instinctual.

Maybe another title will seal that. 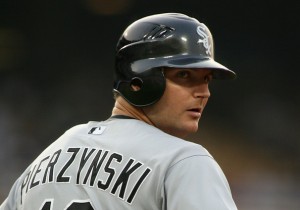 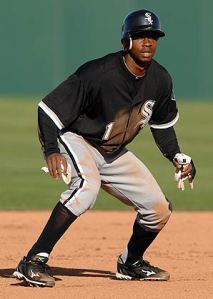 6. If the White Sox win, maybe Juan Pierre will do another unbelievably awful rap

There are few subjects I know less about than rap. But even as a total NON authority, I can tell you that the rap Juan Pierre did at the 2003 Florida Marlins World Series celebration was awful.

He called it rap. For me? The C at the beginning was silent.

Maybe he will improve in Chicago. Or maybe it will be just as bad.

Take a listen. Tell me how it is good.

7. A ring for Omar Vizquel

Vizquel is making one of the least likely runs at 3,000 hits and may have already have punched a ticket for the Hall of Fame.

The greatest defensive shortstop of his generation has played over 4 decades, won 11 Gold Gloves and played on 6 Division Champs and in the 1995 and 1997 World Series.

A ring would be nice.

8. The President needs a Pick Me Up!

There have been lots of ups and downs for the President this past year and no doubt 2012 will be one tense year for him.

Up for reelection, the markets are going nuts, lots of people still out of work and maybe he needs a little reminder of how good “Hope” feels.

Maybe his team winning the World Series can kick start his campaign!

Do it for AMERICA, White Sox!

The White Sox are consistently among the top payrolls, they bid for free agents and they act like one of the “Haves” instead of the “Have nots.”

AND they play in a big media market! But they never get mentioned as one of the big bad franchises.

Another title will tie them with the Yankees and Red Sox in the 21st Century. That sounds big and bad for me.

10. It would make the White Sox and Cubs fan dynamic more interesting

Would the White Sox finally the choice of the casual sports fan in Chicago? Would the winning of the South Side out weigh the cute and cuddliness of Wrigleyville?

Two things are for sure.

– White Sox fans hold ALL the bragging cards. Another World Series title would mean the White Sox would have won as World Series in the 21st Century as the Cubs did in the 20th Century.

– If what doesn’t destroy you only makes you stronger, then Cubs fans must be damn near invincible!

So there you have it for the White Sox… Hall of Fame credentials, inter city rivalries, spell check and a Presidential race could all be improved.

They are all good reasons.

But there are other teams in contention too.

And I will get to them all!

I had a whole blog post written in my head for when the Astros beat the Diamondbacks tonight.

It was about the final 44 games and how the Giants and Diamondbacks are basically playing an abbreviated season.

You will forgive me for almost jumping the gun. I mean the lowly Astros had a 5-1 lead going into the 8th inning. I mean even HOUSTON could hold onto a 4 run lead over 2 innings.

They even had a 2 run lead with 2 outs and 2 strikes in the bottom of the 9th.

So forgive me for thinking the Astros had a shot to win.

I didn’t expect a 2 out game tying homer from Paul Goldschmidt who was in AA about an hour ago,

And I didn’t think slumping Chris Young would get a walk off shot.

Sorry that the idea of the Diamondbacks getting 7 unanswered runs in the last 3 innings hadn’t crossed my mind.

So the minor league franchise in Houston is on pace for 110 losses. The franchise has never had a 100 loss team. This one is all but assured that.

If tonight is any indication, that is an impossibility.

But the worst crime they committed? They prevented me from using a blog post that I all but wrote in my head.