The season is winding down and I still have a few more entries left for my Why Each Team’s Potential World Championship Would Be Good For The Game series.

Today it is the Atlanta Braves. I was holding back on the Braves because they were such a lock for the post season that I wanted to get the teams that could fall out done first.

Well lo and behold the Braves could very well be doing a bigger faceplant than the Red Sox are doing. And THAT’S saying something! After dropping 12 of their last 19 games, they have let the Cardinals and maybe even the Giants have hope.

A team that looked like they could challenge the Phillies for the pennant now is playing simply for their playoff ticket.

But if they get in, would anyone care?

1. Fredi González would have his revenge on the Marlins!

Fredi González is a good solid baseball man who was absolutely hosed by the Florida Marlins. He managed the Marlins to winning records in 2008 and 2009 despite having payrolls that wouldn’t pay for the Yankees hotel room service. His reward was not an increased payroll but a pinkslip in 2010. The Marlins are now reeling and dysfunctional and González is leading a solid team just to the north of Florida. He deserved better than what the Marlins gave him.

A manager has their team fighting tooth and nail to get to the League Championship Series. It’s the last year of their legendary career that has had many trips to the post season but only one World Series title. The team loses but the crowd gives him a standing ovation for the memories.

Am I talking about Bobby Cox or Earl Weaver? That’s how Earl Weaver’s career ended as he fought the 1982 Brewers down the stretch. And last year that’s how Bobby Cox called it a career.

Well Joe Altobelli took over the 1983 Orioles and won the World Series. And that title helped Weaver’s reputation. Yeah he only won one World Series, but he handed a World Champion over to his successor.

If these Braves win, more than a few people would salute Cox.

(For the record, I know Earl Weaver came out of retirement. But his second act is best left forgotten.)

3. It is good to have a veteran leader named Chipper!

Now he is the last remaining player from the team. And a National League MVP, 17 seasons and a batting title as recently as 2008 later, Jones is not only going to Cooperstown but now HE’S the veteran leader. 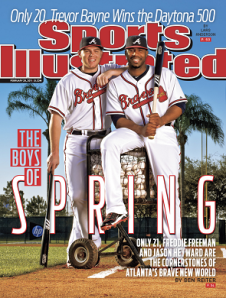 4. A World Series title would usher in the Freeman/Heyward years.

Freddie Freeman and Jason Heyward haven’t been the MVP candidates that people have projected. But don’t forget that they are only 21 years old! They have many years in front of them. Imagine if they get their World Series title out of the way early!

They can build up from a place of substance, then compile some stats for style points. It could be a great era for Atlanta baseball.

5. Speaking of youth… their amazing young staff could become the best in the league.

Will this current staff match the Braves of the 1990s? Probably not. Maddux, Glavine and Smoltz are all Hall of Fame bound.

A World Series title this year and they will match the Maddux/Glavine/Smoltz years and might build on that.

6. Another World Series title could expand the legend of Eric Hinske!

Seriously this guy is the Forrest Gump of World Series recently. He keeps popping up. He joined Don Baylor as the only person to appear in the World Series three straight years with three different teams. The 2010 Braves couldn’t make it 4 in a row (although his Division Series homer gave the Braves a shot last year.)

It’s cool to have a Danny Jackson/Mariano Duncan/Lonnie Smith type who keeps winning titles. Plus how can you not love a big burly softball league looking player like Hinske?

7. Tim Hudson could be the last A’s ace to get a ring.

The A’s won those Division Titles in the 2000s because of their pitching. Yeah yeah yeah, the got walks and somehow Paul DePodesta became Jonah Hill. They had Zito, Mulder and Hudson going 3 out of every 5 games. That will win you a bunch of games.

Both Mulder and Zito have gone on to win World Series rings elsewhere. Perhaps Hudson can be the last of the three to win a ring but the first one to actually PITCH in the World Series! (Mulder was injured and off of the active roster for the 2006 World Series with the Cardinals. Zito pitched himself off of the 2010 Giants roster for the post season.)

Look, I’m not going to get into Politics. And I don’t think Jimmy Carter is holding his breath waiting to have his face carved on Mount Rushmore.

But he seems like a nice guy and he certainly hasn’t wasted his post Presidential career. And he is a huge Braves fan.

While we still have Jimmy with us, it would be nice to see him cheering on a champion.

(For the record, I also find it charming to see Bush 41 at Astros games and Bush 43 at Rangers games.)

9. Terry Pendleton would finally get a World Series ring.

This is enough to get me to root for the Braves. Terry Pendleton’s post season luck has been horrifying. Three times in his career he played on teams that lost Game 7 of the World Series.

He’s somehow never won a ring. That’s insane. I hope he eventually gets one. 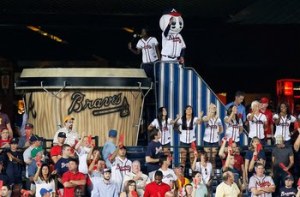 10. Could a Braves title create a new regional superpower?

What has prevented the Yankees from swallowing up every free agent?

The Red Sox started spending against them.

What has prevented the Red Sox and Yankees from signing every free agent? The Phillies started spending money.

See a pattern developing? If more teams are rich and open their pocketbooks, it prevents the monster of having just one team spending dough.

Now Atlanta fans don’t have the best reputation in the country. They seemed to be jaded by the 14 consecutive post seasons as good seats were available for playoff games!

Well how about a new young team winning it all? And the regional pull of the Deep South winning a championship could help the Braves once again become the crazy draw they were in the early 1990s.

Forget Red Sox Nation. This could be the Braves Confederacy!

Of course all this will be moot if the Braves continue their face plant. But if they get into October, there might be plenty of reasons to dust off the old Tomahawks.