It looks like the Tampa Bay Rays are going to trade pitcher Wade Davis.
And this should make Yankees and Red Sox fans soil themselves.

Normally it isn’t wise to deal a 25 year old pitcher with playoff experience who is not eligible for free agency until 2016.

But that’s what makes this brilliant.
Since the start of the 2008 season the Rays have matched the Yankees in playoff appearances, Division Titles and pennants.

They have exceeded the Red Sox in all of those counts.

And while the Yankees try to make sense of their pitching staff and aging roster and the Red Sox are looking at a team at the cross roads, the Rays could get better.

After 2010, they shed payroll, let key free agents go and picked 10 of the first 60 players chosen in the draft, including four pitchers.

They dealt Matt Garza to the Cubs and got a crap load of young players including starting outfielder Sam Fuld and Hak-Ju Lee, their shortstop of the future. They dealt Jason Bartlett to the Padres and got Brandon Gomes, Adam Russell and Cesar Ramos, all who were solid relievers for Tampa.

In other words, they know how to get value in their trades.
Right now the Rays could use a corner outfielder or a DH plus a catcher.

And what better piece of trade bait could there be than a pitcher?
A young talented pitcher with big league experience, playoff baseball under his belt and a reasonable price tag in terms of salary?

And take a look at the Tampa Bay pitching staff.
David Price is solid and is still only 25 years old.
James Shields is the Old Man River of this team at 30.
Jeremy Hellickson is 25.
Jeff Niemann is positively ancient at 29.

Relievers Gomes, Russell and Ramos are all under 30.

Jake McGee and Alex Cobb each have experience and are under 25.
And Matt Moore, the best pitching prospect in baseball, won a playoff game and will only be 23.

10 talented pitchers all 30 or under on a team that has made the playoffs 3 of the past 4 seasons?

And that DOESN’T include Wade Davis who will turn 26 next season and is signed through 2014 and under team control until 2016.

Now take a look at this off season. Which team needs pitching?
A few.
The Yankees.
The Red Sox.
The Blue Jays.
The Orioles.
The Mets.
The Nationals.
The Marlins.
The Reds.
The Brewers.
The Cardinals.
The Pirates.
The Rockies.
The Diamondbacks.
The Dodgers.
The Angels.
The A’s.
The Rangers.

That’s 17 teams off the top of my head who should probably be thinking about upgrading their pitching staff if they want a realistic shot at a playoff run in 2012.

Now with CC Sabathia off of the market, who is available via free agency?

C. J. Wilson? As I wrote before, he’s a flop waiting to happen.

Mark Buehrle? He’s probably going back to the White Sox. Besides as wonderful as Buehrle’s career has been, is it wise to sign someone who is entering their mid 30s to an expensive long term contract?

Yu Darvish? Hisashi Iwakuma? Sorry. After seeing Dice-K break down, I will believe it when I see it.

Roy Oswalt? Mid 30s. On the decline. Will be expensive and cost picks. No thank you.

Hiroki Kuroda? He is talented but at age 37 is also a big risk.

Edwin Jackson? A nice #4 starter but hardly a difference maker.

Javier Vazquez? I wouldn’t touch him with a cattle prod.

Eric Bedard? Joel Pineiro? Paul Maholm? Rich Harden? Jason Marquis? Sure they are all talented and all injury risks who may have their best days behind them.

Which one of those pitchers would you want over Wade Davis?
Especially at his current controlled salary?

So they could play a few teams off of each other.

A team with a lot of playoff experience and talent to spare and a smart front office who can make shrewd moves need to trade for a bat or 2 and have a young, inexpensive, talented, big league and playoff tested starting pitcher to trade who could be the best arm available.

If a team has a surplus of young outfielders and a young catcher it would behoove them to deal both to the Rays to improve their staff.

Meanwhile the Rays would go into 2012 with a deep rotation, nice bullpen and a new bat or two to go along with Longoria, Upton et al.

And the Yankees will throw money at the latest flavor of the month and the Red Sox will wander the woods hoping that fans still have their 2004 and 2007 DVDs. 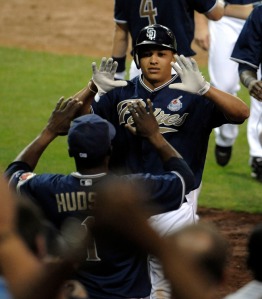 But I think I am right about this.
I think the San Diego Padres will be in a position to be in the World Series BEFORE big market teams like the Red Sox, Cubs or Mets.

Yeah yeah yeah, I know. The Padres were a whole lot of suck last year. And I know their penny pinching ways aren’t going to end in 2012.

And their chances of winning in 2012 are slim to none.
You know… like the Diamondbacks’ chances were in 2011.

I know the Padres will be in full “Let’s see what we’ve got in the minor leagues” mode in 2012 and the mantra will be “Patience while we give some talented players some experience.”

But guess what? That’s a better place than the Red Sox, Cubs or Mets will be in for 2012.

The 2012 Red Sox will still be reeling from a September that took them from a potential World Series to the scorched Earth purging of the front office and management. Nobody even knows who is running the show.

The 2012 Cubs have a nice story with the arrival of Theo Epstein. But when he took over the Red Sox after the 2002 season, they had just won 93 games and were a contender until the last week of the season. This Cubs team is a 91 loss mess with the Soriano and Zambrano contracts making it damn near impossible to make any major moves this season.

And those two teams are locks for the playoffs compared to the Amazing Messed Up Mets. They have unmovable contracts, injured stars, their marquee player (Jose Reyes) is a free agent and who knows what their financial situation is. Will they be sold? Will MLB focus on the Mets after the Dodger debacle is cleared?

The Padres are in a much better place. They KNOW what they are doing. They are playing young prospects and have a low payroll.

Heath Bell could leave via free agency and give them even more payroll flexibility and draft picks. Or he could stick around and anchor the bullpen and give the young pitchers some built up confidence.

Mat Latos had a step back season but still wasn’t bad. And he will only be 24 next season. Clayton Richards, Cory Luebke, Josh Spence and Ernesto Frieri are all young and pitching in one of the best pitchers parks in the league.

Um… that is potentially a staff 6 pitchers deep.
Can the Red Sox, Cubs or Mets say that? Honestly?

Plus they have young Robert Erlin, Anthony Bass, Joe Weiland and Casey Kelly not far away.

They have the likes of Cameron Maybin and Kyle Blanks who seem to have been around forever but they are both still only 25 years old.

They have the young Anthony Rizzo who has already made his big league debut. So did another minor league stud, James Darnell. Third baseman Jedd Gyorko is working his way up the system.

Mix that all in with the fact that they play in a totally unpredictable division.

Between 2005 and about 2 weeks to go in the 2007 season, it looked like the Padres had control of the NL West.

Oh wait! The Diamondbacks won the 2007 Division title and about midway through the 2008 season it looked like it was theirs for a while.

Except that the Giants won it all in 2010. And their repeat in the NL West was preordained…

But nobody told the Diamondbacks who suddenly became the Division standard bearers again.

Throw in a pennant and a Wild Card in Colorado and this Division is anyones.
Teams turn around, flame out and turn around again quickly in the NL West.

And the Padres would have almost all of the names I mentioned controlled for a few years and be allowed to gel and have a few reasonable additions to the payroll. By 2013 or 2014 they will have a legit shot at the playoffs.

As we saw by the last few Octobers, a team can make it to the World Series if they get on a roll.

The Padres have a DIRECTION.
Can you honestly say that about the Red Sox? The Cubs? The Mets?