When Matt Kemp signed his insanely long contract extension, it struck me as odd that Frank McCourt was still front and center.

Isn’t he about to sell the team?
Isn’t the McCourt era coming to a merciful ending?

But then I thought “HE’S A GENIUS!”
Seriously, he wants to get good will going with Dodger fans so he’s going on a spending spree.

What does HE care? He’s not going to pay for it! So walks out the door, having brought every big free agent to L.A. and it’s up to Orel Hershiser or whomever takes over the team to sort it all out.

What a way to go!

It is looking more and more like Bobby Valentine will be the next manager of the Boston Red Sox. I can’t say I am all for it or against it.

Obviously if Valentine comes in, I will root for him to do well.
I always thought that Bobby V was a fun and entertaining manager who did a good solid job in Queens. Remember the post Davey Johnson years were a wretched dumping ground of bad free agent signings, bloated expectations and losing seasons.

In 1993, the Mets were the worst team money can buy.
They had 6 straight losing seasons before Bobby V arrived.

He had one losing season and was out the door.

Which is telling. Bobby V rubbed people the wrong way. He was a know it all and didn’t seem shy in telling people of his great knowledge. 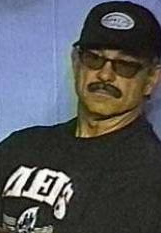 And lest we forget he disguised himself to sneak back into the dugout after he had been ejected. I still think that is one of the funniest moments in baseball history.

Bobby did all of that in the cauldron of New York just as the 24 hour sports news cycle and the internet became influential.

I always felt like Bobby V should have taken over a franchise that had some talent but was a small enough media market that he could become a revered figure. Basically a crazier Tony LaRussa.

And he seemed to love the respect he got in Japan during his years of managing there. Maybe a team like Kansas City with their young talent could be Bobby V’s domain. Actually I thought the Marlins were an ideal fit for him, but that is Ozzie land now.

Then again, as I wrote last year, Bobby V can take his time. He has a great job on ESPN and is terrific on the air where being a Know It All is a positive thing. (And if he gets something wrong, no team lost because of his decisions.)

It would take a great job to lure him out.
The Red Sox would certainly be a high profile job. And with Pedroia, Youkilis, Ellsbury, Gonzalez and Lester still around they have a nice foundation.

I think the Red Sox are 2 years (and probably 8 pitchers) away from being a true pennant contender again.

Then again, how many people had the Tigers winning the 2006 pennant when Jim Leyland arrived?

It is an intriguing potential signing. And would be worth every penny if for no other reason than the post game press conferences will be awesome. 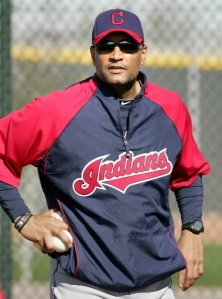 But I find Sandy Alomar Jr. to be an interesting potential manager as well.

He caught in the big leagues for 18+ seasons, making the All Star Team 6 times and he would have been the World Series MVP in 1997 if Jose Mesa could have held onto the lead.

As a catcher for nearly 2 decades in the big leagues, he called games and was brought in to mentor young catchers with the White Sox, Rockies, Rangers, Dodgers and Mets.

He has experience as a instructor, a coach and a bench coach.

In other words for a quarter of a century he has been thinking baseball strategy on the major league level. And he has the on field success to back up his instruction.

And he also beat Mariano Rivera in a playoff series. Just saying.

SOMEONE will be the recipient of that positive baseball knowledge. Why not the Red Sox? Sandy Alomar Jr. is a man who was raised in a baseball family with a Hall of Fame brother to boot!

Who can hear “Sandy Alomar Jr.” and think “What the hell does HE know?”

Bobby Valentine is the best choice to win NOW. I personally don’t think the Red Sox are going to win now… but I didn’t exactly pick the Cardinals last year or the Giants the year before that!

I guess I will be fine with either one.

Then again, I would have been fine with Kevin Kennedy coming back too.