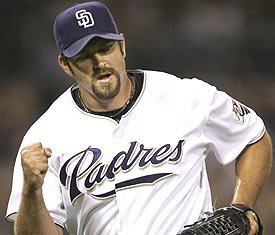 Well up to now, the Marlins have just been putting on a show.
They have new uniforms, an ugly statue, a brand new ballpark and a crazy new manager.

They’ve wined and dined every big free agent to show their fans they mean to add lots of payroll.

But unless you think of Wade LeBlanc as a big star pick up, they haven’t actually brought anyone big in.

(And if Wade LeBlanc is your idea of a star, then chances are you think he played Joey.)

Well that changed a little bit this morning.
Heath Bell made the closer market a little thinner all the while paying all the bills for the rest of his life by signing a 3 year, $27 million contact with the Marlins.

Miami (not Florida) has their closer and will be the first indication to either Albert Pujols, Prince Fielder or most likely Jose Reyes that the checks will indeed clear.

My friend Gar, The Batting Stance Guy, wrote on Twitter “Could be construed as manipulative but Marlins final pitch to HBell included: “Padres still owe us for THoffman trade”.

It’s also good news for the Marlins that Josh Johnson is starting to throw again. A healthy Johnson in 2012 would be like trading for an ace without giving up any players.

Now it is risky to sign closers to big deals. He’s in his mid 30s and relievers can flame out pretty quickly. But it is a safe bet that he’ll give the Marlins a good year or two.

(Meanwhile, the Padres get some payroll flexibility and can stick someone like Ernesto Frieri or Anthony Bass in the closer role for a pittance all the while building up their farm system with two more picks. But that has more to do with my thoughts on why the Padres are in better shape that we think… I digress.)

The Marlins are hoping that the Phillies age will catch up with them and Ozzie (plus fans in the stands) can give the Marlins a boost. And with Bell closing games (and 2011 closer Juan Oviedo setting up) maybe they can indeed get back to October.

And remember, the Marlins are the only franchise in baseball to NEVER lose a playoff series. (If the Marlins win the 2012 World Series, put all Indians and Cubs fans on suicide watch!)

Take note free agents.
There could be a new big market big spender in baseball… at least for the next few months.

Like Tony Montana before them, the Marlins are in Miami and ready to spend money lavishly. Get in the game while they are spending.

And maybe they can activate that statue when he closes a game!