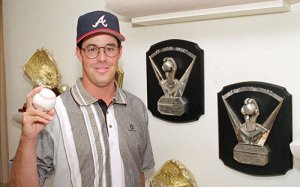 The 1990s were the peak of the steroid era. But while we all experienced gaudy offensive numbers during the decade, we may have witnessed the best Cy Young era in baseball history. Let me explain.

The current run of Cy Young winners include some great young aces and one who I think is already Hall of Fame bound.

CC Sabathia and Roy Halladay are, I think, either Hall of Fame bound or damn close to it. (Cliff Lee and Zack Greinke will need to pile up some more ace seasons to get Cooperstown talk.)

If Verlander, Lincecum, Kershaw and King Felix keep up their great careers, then we could be in the middle of one of the great stretches of Cy Young winners ever.

Or it could be like the 1980s, where pitchers like Fernando Valenzuela, Bret Saberhagen, Frank Viola, Doc Gooden and Orel Hershiser put together great starts to their career but couldn’t translate them into Cooperstown.

I started thinking about when was the best era of Cy Young winners. And I don’t mean best stats but rather the most straight years of future Hall of Famers.

I figured it would have been the first few years of the Cy Young (1956-1966) when they gave out only one award for both leagues. And indeed there were Warren Spahn, Early Wynn, Whitey Ford, Don Drysdale and Sandy Koufax winning awards.

1968 to 1973 saw 6 straight years of future Hall of Famers winning the National League Cy Young Award. (Bob Gibson, Tom Seaver, Fergie Jenkins and Steve Carlton.) In that same stretch the American League had Jim Lonborg, Denny McLain, Mike Cuellar and Jim Perry, none of whom are in the Hall.

Between 1972 and 1976, Hall of Famers Gaylord Perry, Catfish Hunter and Jim Palmer won the American League Cy Young Award while Randy Jones and Mike Marshall broke up the Hall of Fame streak in the National League.

The National League started a future Hall of Fame streak between 1977 and 1980 with Steve Carlton, Gaylord Perry and Bruce Sutter winning. The late Mike Flanagan won in the American League as well as non Hall of Famers Sparky Lyle, Ron Guidry and Steve Stone.

Then between 1981 and 1990 came a run where Rollie Fingers and Steve Carlton were the only future Hall of Famers to win (although steroids or not, I think Clemens will eventually get in.)

Then comes the run that should catch all of our eyes. 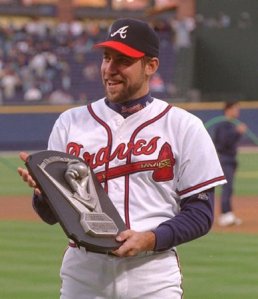 Assuming Roger Clemens gets in EVENTUALLY, then only Jack McDowell, Pat Hentgen and David Cone are NOT Hall of Famers in the bunch.

That’s 19 out of 22 Cy Young Awards handed out to Hall of Fame pitchers (Eckersley is already in.)

Seriously, Greg Maddux and Randy Johnson should get 100% of the Hall of Fame or some writers should get their credentials revoked. Pedro Martinez, Tom Glavine and John Smoltz all deserve to get in as well.

And someday Roger Clemens (and Barry Bonds for that matter) will get in.

Did we realize it when we saw it what a great run we were watching?
Did we note how great the PITCHING was in the steroid era? Or at least what star power there was? 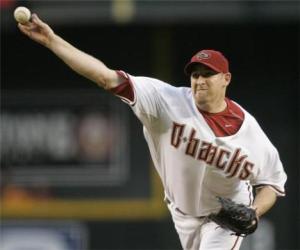 Let’s turn the clock back to 2008.
2008 wasn’t that long ago.
It was a mere 3 years ago. Most stars from the 2008 season remain with the same team now. Cliff Lee and Zack Grienke have found new homes, but the rest of the Cy Young winners and MVPs are still in place.
The players drafted in 2008 are just now creeping into the big leagues. So when I turn the clocks back to 2008, I’m not exactly saying “Let’s go to the Dead Ball Era.”
In 2008, Brandon Webb looked like he was putting together a potential Hall of Fame career.
At age 27, he won the 2006 Cy Young.
At age 28, he threw 42 straight shutout innings while pitching the Diamondbacks to the NL West Title and the NLCS, finishing second in the Cy Young race.
At age 29, he won 22 games and once again was the runner up for the 2008 Cy Young.
You can’t have a better run that that. No doubt if he became a free agent after 2008, he would have been the highest paid pitcher in the game.
At age 30, he threw on opening day for 2009 but had to be removed after 4 innings.
He hasn’t thrown a big league pitch since. If he career isn’t over after basically missing the last 3 years than it is damn near over.
Going forward in time, Webb’s Cy Young Award will be relatively obscure.
Some baseball fan in the future will be going through past Cy Young winners and think “Man, someone named Brandon Webb won the Cy Young!”
And chances are that fan would say “Jake Peavy won too? Who was that? And who was Eric Gagne.”
The National League had some pretty obscure Cy Young winners between 2003 and 2007 (throw in Bartolo Colon‘s undeserved AL Cy Young in 2005 too.)
Every once in a while the Cy Young goes into an obscure stretch.
Look back at some of the winners in the 1980s. 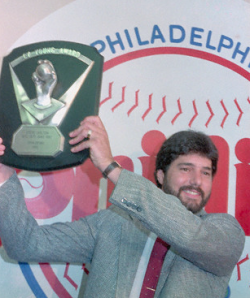 Pete Vuvkovich won the AL award in 1982.
Lamarr Hoyt won the American League in 1983 while John Denny took home the National League prize.
Willie Hernandez took home the AL Cy Young (and MVP) in 1984.
Steve Bedrosian won the NL Cy Young in 1987 and Mark Davis got his in 1989.
Not exactly a line up of future Hall of Famers.
I am not belittling any of their seasons. Each of those pitchers had a terrific season and got a slice of immortality.
The same can be said of Brandon Webb, Jake Peavy et al.
The likes of Clayton Kershaw, Felix Hernandez, Tim Lincecum and Justin Verlander have all won Cy Young awards and could become reliable long term aces whose Cy Young trophies won’t be surprising.
Then again, Brandon Webb looked like he was becoming that kind of ace as well.