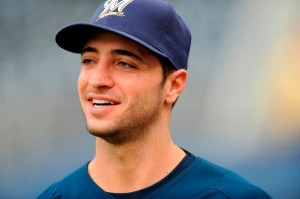 Well won’t this MVP presentation be awkward for Ryan Braun on opening day.
“Here’s your trophy. Now sit down for the next 50 games for being caught with PEDs.”

They should bring in Manny to replace him while he is sitting out his suspension.

He’s rested, won’t cost him a draft pick, is usually good when he arrives on a team and hey… you can’t play the whole “We don’t want a juicer on our team” angle.

Yeah it’s sad because Braun seemed like a good guy and easy to root for. But the guy tested positive, and how much of a blockhead do you have to be to come up positive in this day and age.

Either way, let me just say I don’t feel so dumb thinking Matt Kemp was the MVP of the National League over Ryan Braun!

No trade chip has more value than a young talented starting pitcher.
Pitching wins games, most teams could use at least one talented starter.

Have that pitcher be young and under financial control and you have yourself a great pick up.

Well, maybe it is because they play in the desert, but not a lot of people are giving the Diamondbacks credit for some quality trades that have given them a very good rotation… the likes of which I have never seen before.

Turn the clocks to the end of the 2009 season.
Ian Kennedy was a talented if enigmatic pitcher for the Yankees and supposedly one of the pitchers of their future.
Joe Saunders was coming off 17 and 16 win seasons and was a young All Star for the Angels.
Daniel Hudson had just gone 14-5 in the minors at age 22 and was one of the White Sox’s best pitching prospects.
Trevor Cahill was one of the top 15 prospects in all of baseball and at age 21 had spent an entire season in Oakland.

Fast forward to 2011, and all 4 are members of the Diamondbacks who are the defending NL West Champs and have a manageable payroll and a young rotation poached from other teams.

The trades have settled and they have a terrific rotation to take on the Giants and defend their title.

I can’t remember a playoff caliber rotation that is almost exclusively the result of shrewd trades to bring in young talent. Usually there are a few free agents or home grown players thrown in. Sure the Red Sox in 2004 had 5 starters in the rotation brought in from other teams. But Pedro and Schilling were established stars when they arrived in Boston.

I can’t think of one off hand. Hats off to the Diamondbacks front office.

So Diamondback fans… SHOW UP! You have a great and unique product.