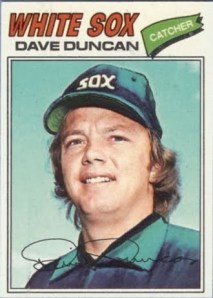 Seriously… take a good long look at this card.
I was about to write a post about Duncan and why I think he belongs in the Hall of Fame as a brilliant pitching coach.

But when looking for a picture for the post, I stumbled across this amazing card.

Back in the 1970s and 1980s, when a player switched teams in the off season, Topps would issue cards where a player’s new team uniform and cap painted onto a picture.

Even as a 7 year old kid, I thought this practice was strange and I wasn’t fooled.
The pictures often looked a little off. Like someone with a chive stuck in their teeth, you can’t help but notice that it wasn’t right.

This one of Dave Duncan is astounding for so many reasons.

First of all the paint job sucks.
If you painted it and are reading this blog, I’m sorry. It wasn’t your best work. Everyone has done something that sucks. Kubrick had Eyes Wide Shut. Paul McCartney had Simply Having a Wonderful Christmas Time. You had the Dave Duncan 1977 Topps card.

It wasn’t your finest hour.

Duncan, who was on the Orioles in 1976 was dealt to the White Sox for Pat Kelly in November of 1976. The editors of Topps dug up a close up of Duncan and started painting away.

The S-O-X on his cap is too squished. There is a strange attempt at a shadow on the hat. And of course the White Sox uniforms had lapels. So the artist slapped on fake lapels.

And let’s face it, the blue neutral background looks kind of fake too.
So the only thing in this card of Dave Duncan that looks remotely real is his head.

It looks as real as when you stick your head in a hole to take a silly picture like I did at Pea Soup Andersen’s last month.

And here’s the kicker for me.
All that effort was made so when fans collecting cards could have Duncan on his current team.

Do you know how many games he played for the White Sox?

That would be zero.
He was cut in spring training and never played another game in the majors.

He went on to be the greatest pitching coach in my lifetime, turning around staffs and making mediocre pitchers into aces and multimillionaires.

He is leaving the Cardinals as a World Champion to take care of his ailing wife. I wish them both all the best and to get well.

And I hope Dave NEVER has to have lapels painted on a picture of him again.