The franchise that is now called the Washington Nationals have called more NATIONS their home than have had pitchers clinch a post season series.

In 1969 they were formed as the Montreal Expos, being the first team to play in Canada.
In 2005 they played their first game in the District of Columbia as the Nationals.

And in their 43 seasons they have made the post season once. In the strike interrupted 1981 season, they were the second half champs and played the first half champs, the Phillies.

Now the Cardinals actually won more games than the Expos or Phillies did over all, but in ’81 they split the champions up and St. Louis, second place in the first and second half, were out of luck.

One strike helped the Expos. Another tooketh away.
The 1994 Expos were one of the most talented teams of the decade, but were denied a shot at the playoffs because of the season ending strike.

So the team only played in October in 1981. They won the series against the Phillies but Rick Monday and the Dodgers broke their hearts and no World Series was ever played in Quebec.

As I wrote before, no Washington pitcher ever clinched a post season series. The Senators lone championship was won on a walk off single by Earl McNeely.

So this is it… the only post season series clinched by a Montreal or Washington pitcher. 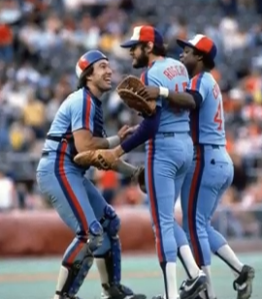 So that’s it.
Steve Rogers. (Not Captain America.)

But it is a safe bet as well that big league baseball won’t return to Montreal any time soon.
So Rogers eliminating the defending champion Phillies will remain that team’s greatest moment.

That is a shame.
The Expos had a wonderful team for a while.

They were worth a salute.
Watch this video and say Au Revoir. 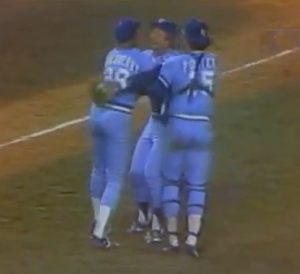 It may seem like 3 lifetimes ago, but the Kansas City Royals were once a powerhouse.
From 1976 to 1985, they played in a post season series 7 out of 10 seasons (including the 1981 Divisional Playoff against the A’s.)

6 out of those 10 years there were only 4 playoff teams all together. In other words they didn’t take advantage of a Wild Card to get in.

Alas in the 26 seasons that followed, the Royals haven’t played in another post season and have contended only once since the 1994 strike. In other words they have become the Pirates of the American League. Once mighty, now a farm team for the rest of baseball.

Now of course the team has a ton of young talent and if the small market Twins could turn things around and go on a playoff run, then anything is possible.

But as I continue my “Pitchers who clinched a post season series” I decided to check Kansas City off the list.

Why?
Because they’ve only won 3 playoff series in their history and I figured this would be a quick one to get out of the way.

Here are the pitchers, the game they pitched, and how was the last out recorded. 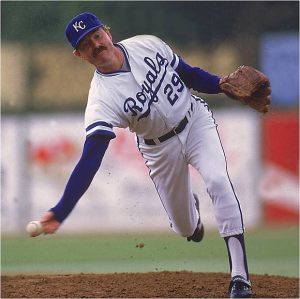 3 2/3 innings of relief Paul Splittorff for the win.
LAST OUT: Willie Randolph called out on strikes.

2/3 innings of relief of Bret Saberhagen and Charlie Leibrandt.
LAST OUT: Lloyd Moseby grounds out to second baseman Frank White who threw to first baseman Steve Balboni for the out. 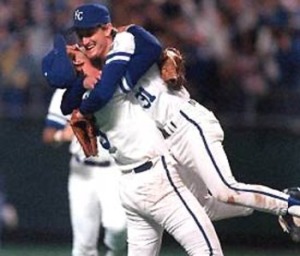 There you have it. The two pitchers who experienced that great post season moment for a once proud franchise.

To read the other entries, here’s the one for the Phillies and the Red Sox.

It’s been too long since a clincher, Royals.
I want to add Joakim Soria to this list.