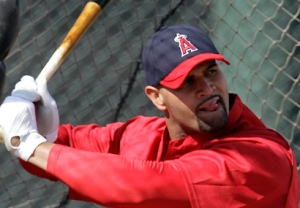 He’s an Angel.
Albert Pujols belongs to another team.

For some reason it just seems real when spring training starts, more so than any press conference.

It looks odd.
I remember when Pedro left the Red Sox for the Mets, I never quite accepted it until I saw him in Spring Training.

I can’t imagine what a 15 year old Cardinal fan who probably has no memory of a St. Louis team WITHOUT Albert must be feeling.

Take the solace that I had when I saw Pedro wearing an odd uniform:

The last time he played for MY team, he was winning a World Championship. (Both in St. Louis!)

So yeah, it sucks. But it isn’t the end.

I covered that in my video.