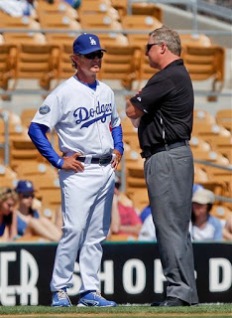 One week ago, I wrote an article for The Hardball Times where I claimed the Dodgers 2012 season was impossible to predict. With no knowledge of ownership, how could anyone say for certain how anything was going to unfold.

Here we are a week later and I picked the Dodgers to win the NL West title.
So what changed?

I don’t think you can underestimate the effect of having the ownership situation resolved in Chavez Ravine. For those of you outside of our fair Los Angeles county, you might not understand. But the ugliness of the McCourts hung over everything in Dodgerland. Not just with the embarrassing headlines and uncertainty. There were some weeks it looked like they weren’t going to make payroll. They didn’t know what an MLB takeover would mean.

And all this taking place in a half empty Dodger Stadium scattered with bitter fans.

Now there is going to be at least relief. The embarrassment is over.

So are the tight purse string days. The Dodgers desperately needed an ace pitcher when they were on the verge of putting together a real World Series contender.  CC Sabathia changed unifoms twice since the start of the 2008 season. Cliff Lee has switched teams 4 times. Roy Halladay and Danny Haren went to different clubs. And none of them were rumored to be Dodger bound.

The Dodgers made one blockbuster move in the last few years: Bringing in Manny Ramirez. And that trade included the Red Sox paying nearly all of Manny’s salary.

New management knows that there is a lot of bad feeling in Los Angeles regarding the Dodgers. It is a safe bet to assume the team will try to fill in holes and make a blockbuster move.

And, despite all the turmoil, there was a lot right with the 2011 Dodgers that will return in 2012.
The NL Cy Young winner Clayton Kershaw is still there. Newly signed Matt Kemp will bring his MVP worthy butt to center field. And perhaps a sensible conclusion can be found for the Andre Ethier contract.

Either way, logistically and emotionally these could be good times now in Los Angeles. And the pieces were in place for a team that finished with a winning record despite the turmoil.

Mix that with the Giants injuries and weak linup and the Diamondbacks counting on a lot of young players to replicate their 2011 Division title.

And voila!
I’m picking the Dodgers! It makes sense to me.

In my 2012 official picks, I said the Pittsburgh Pirates were going to celebrate the 20th anniversary of their last winning season with a Division Title.

It is an unorthodox pick, I will grant you. It is the kind of thing that could make me look very stupid at the end of the year. (Remember I picked the Oakland A’s to win the 2009 World Series?)

But I am serious with my pick. And let me explain why:

THE NATIONAL LEAGUE CENTRAL ISN’T PRETTY
Yes, last year the NLCS was a battle between two NL Central teams, the Division Champion Brewers and the eventual World Champion Cardinals. But both teams had key subtractions.

The Brewers lost Prince Fielder and any goodwill surrounding Ryan Braun. Yeah, he beat the suspension, but there will remain unpleasant scrutiny. They have a good pitching staff, but they might take a step back.

The Cardinals didn’t lose anyone big. Just Tony LaRussa, Albert Pujols and Dave Duncan. With Chris Carpenter hurt (and no Dave Duncan to work miracles), a repeat title is not likely.

The Reds seem to be the consensus pick. But they are already hurting in the bullpen with Ryan Madson out. And Mat Latos is moving from pitcher friendly San Diego to hitter friendly and is a mystery.

The Cubs and Astros stink and won’t be a factor.

If any division is ripe for a surprise winner, it is the NL Central. It probably won’t take much more than 90 wins to take it. Plus more games against the Cubs and Astros means a bigger number in the win column.


LAST YEAR COULD HAVE BEEN A GOOD LEARNING EXPERIENCE
The Pirates were tied for first place on July 25th last year. They went 19-43 the rest of the way.

But maybe that mid season success mixed with late season failure will be good for Andrew McCutchen, Neil Walker, Jose Tabata et al. They got a taste of something good and saw it slip away. That has to be more productive than just stinking from opening day to elimination.

Plus with the extension to McCutchen, the Pirates are showing a commitment that they are trying to build something rather then just be a AAAA team.

THERE IS ALWAYS AN OCTOBER SURPRISE
Just about every year there is a team whose season just makes no sense to the pre season predictors. Oh, I’m sure YOU had the Diamondbacks winning the west last year and Ian Kennedy becoming a 20 game winner.

Those Rockies were managed by current Pirates skipper Clint Hurdle, who basically rode a hot September all the way to the World Series.

I don’t think the Pirates will get THAT far. But it isn’t outrageous to think a young team filled with players who caught a glimpse of contention last year could build on that and take advantage of a weakened division.

Of course they could also lose 110 games. James McDonald, one of their hopefuls in the rotation, got completely shelled today. Who knows? This could wind up being my worst prediction yet.

But if I picked the Reds and they won, who would remember?

OK, first of all I realize that Magic Johnson is not going to be running the Dodgers. I understand that he is part of the team that is buying the Dodgers. Stan Kasten is the main baseball mind in this group. Peter Guber brings the show business know how. Magic very well might simply be the public face and symbol of the new ownership.

Well as symbols go, Magic is a pretty good one.
After the humiliation of the Frank McCourt, Los Angeles needs to have some positivity in terms of the Dodgers.

What sports figure in Los Angeles is bigger and more loved than Magic Johnson?
He was the brightest star in the greatest era in L.A. sports history.

Think about Los Angeles sports in the 1980s. What city had a better decade?
The Dodgers had Fernando mania, Hershiser’s streak, the Gibson homer and were the only team in the decade to win multiple World Series.

The Angels had Reggie Jackson, Rod Carew, Fred Lynn, two trips to the ALCS (and nearly won both) and were featured in The Naked Gun.

The Raiders were in town and won Super Bowl XVIII.

The 1984 Olympics showcased the city and America (and helped reelect Reagan.)
Even the Kings became glamorous when Wayne Gretzky arrived.

It’s interesting that the brightest era L.A. sports ever saw ended abruptly when Magic retired after testing positive for HIV.

Los Angeles fell into a dark period in the 1990s. The Lakers didn’t make the Finals for 8 years. The Darryl Strawberry years for the Dodgers were a bust. The Angels had their massive collapse in 1995. The Dodgers were swept in their only two post season appearances. Tom Lasorda had to retire. Wayne Gretzky was traded away. The Rams and Raiders left town.

Practically the only bright spot was Magic’s triumphant performance in the 1992 Olympics. But it says a lot that the best thing to happen in Los Angeles sports for a decade took place in Spain!

The Lakers, Angels (and Ducks) won titles in the 2000s but it is time for the Dodgers to have that sense of glamor and excitement.

Why not have the face of the brightest moments in Los Angeles sports represent a renaissance for the Dodgers?

It’s a more pleasant image than McCourt, isn’t it?