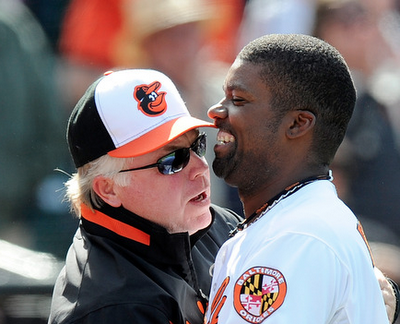 Did you notice that the Orioles are hot?

Not just based upon their 5 run bottom of the 9th win today capped by Wilson Betemit’s walk off 3 run jack.

But Buck Showalter is entering the month’s final game tied for first in the Division. The Orioles have a better record than the Yankees, the Red Sox, the Tigers, the Angels and many other teams that were expected to contend.

Adam Jones is off to a great start. Red Sox nemesis Nolan Reimold is hitting the ball well. Matt Weiters is driving in runs. And Tommy Hunter looked terrific today (I thought last year he was a good pick up for Baltimore.)

Jim Johnson has been spot on as a closer and while the Red Sox and Yankees try to piece together a rotation, Jason Hammel and Wei-Yin Chen join Hunter as solid starters so far. If Jake Arrieta and Brian Matusz can get their acts together, this would be a deep staff.

So who should get credit for this?

But the feeling in Baltimore is good right now.

And that bird has reason to smile.

Wins and losses can be such a brutal stat sometimes.
Jake Peavy pitched yesterday against the Red Sox, going 9 innings, giving up 1 run on 4 hits and 1 walk.

He is credited with a  loss, preventing him from catching Robbie Ross and his 4 vulture wins.

But the loss not withstanding, it is his second straight complete game where he looks like an ace.
I hope he is picked as pitcher of the week as yesterday’s tough luck loss would be combined with Mondays 3 hit shutout.

As he stands this year, his average start is as follows:

That’s the way an ace pitches.

It’s been a while since we’ve seen ace Jake Peavy. Ken Williams has received a lot of heat for trading way some young talent for Peavy, including Clayton Richard.

Well Richard doesn’t look very impressive this year and the White Sox have found themselves an ace. If they get their bullpen together, the South Siders could hang around the Central race for a while.

And lest we forget, Peavy already has a Cy Young Award on his mantle.
If he keeps this up, could he be an A.L. Cy Young candidate to go along with his N.L. award?

On May 1st when the A’s visit Boston, Oakland pitcher Jarrod Parker is scheduled to make his second start of the year.

The former first round pick was one of the keys in the Trevor Cahill to Arizona trade last winter and the 23 year old showed a lot of promise in his first start against Chicago.

But the minute he climbs on the Fenway mound next Tuesday, a strange statistical fluke will be no longer true. And I for one would like to point it out.

Last year, Parker pitched one regular season game for the Diamondbacks.
He started the September 27th game against the Dodgers and pitched well.

Then he was, to I’m sure his surprise, added to the Diamondbacks post season roster last fall. He pitched 1/3 of an inning in Arizona’s Game 4, series tying win against Milwaukee.

And last week he made his debut for the A’s.

I remember when the trade was made, I thought it was strange that Parker had appeared in as many post season games as he had regular season games.

Will we ever see that again?
Probably not.

If we do, will anyone but me notice?
Probably not.