Seriously. What better bang for your buck can you get in these lean economic times than the Blue Jays and the Blue Jays?

Think about it. If you bought tickets for the first two games in Cleveland, what will you expect?
18 innings of baseball, right?

Well you nearly got 18 innings in game 1 during the 16 inning opening day Marathon.
It was complete with great pitching, blown saves and some drama.

So all you would be entitled to in Game 2 would essentially be 2 innings.
But guess what?
More great pitching. Both bullpens wet the bed in the 9th and the game went into the 12th.

So Cleveland fans got 28 innings for the price of 18!
That’s 10 free innings!
A whole extra game PLUS 1 inning!

Well, you know those deals always come with a catch.

There has been a lot of terrific starting pitching so far this season.

Who didn’t look good?
My picks for the Cy Young Award.

Tim Lincecum let up a pair of first inning homers and was chased out in the 6th inning.
C. C. Sabathia (sorry, I still used the periods) coughed up a first inning grand slam to Carlos Pena.

Is there enough time in the season for Linecum to lower his 8.44 ERA?

By the way, for those of you who don’t understand why wins, while important, can be overrated, please consider the fact that if Mariano Rivera didn’t cough up the lead in the 9th, Sabathia would have won yesterday’s game with his 6 inning 5 earned run performance.

Meanwhile the other day, Pirates starter Eric Bedard went 7 innings, gave up just 1 run against the Phillies and got the loss.

Which one pitched better?

Then again, it IS early. 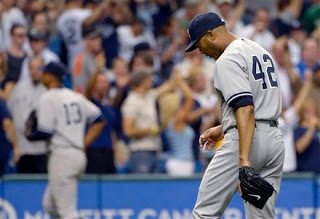 The Red Sox lose on a walk off hit and the Yankees get stunned by a come from behind Tampa rally.

The only difference is the Yankees had already clinched on that fateful day last year and Mariano Rivera didn’t pitch.

Today, the Rays roughed up both CC Sabathia and Mariano Rivera.
Yeah, I know. It is early.

But guess what? If the Yankees finish one game behind the Rays and are forced to play in the one game Wild Card round, they can look back to opening day and say “Man, we could have used that game.”

And… stats don’t lie… both the Red Sox and Yankees bullpen coughed up a game in the 9th.

At this point, the two teams are equal.