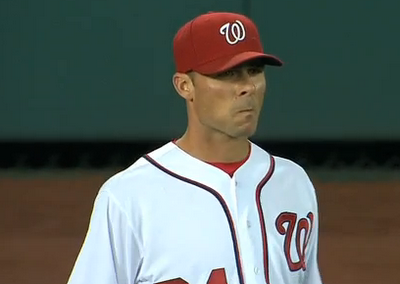 Nats right fielder Rick Ankiel threw a laser beam to home plate in last night’s game that got the stadium and announcers buzzing.

The clip can be seen here.

The radio and TV announcers kept repeating with utter surprise that “Ankiel threw a strike from right field.”

And it was indeed a strike to the catcher.

Maybe LaRussa should have had him pitch to the Braves that year from right field.

Did anyone else notice that?
The guy who was the center piece of the George Sherrill with L.A. and was ranked as the #60 prospect in the game by Baseball America was DFA’d today.

Granted, it was a roster move in order to bring catcher Luis Exposito to the team. It’s not like he’s being cut. He’s not even on the major league roster. He’s 3 for 32 in AAA Norfolk and the Orioles want to use Exposito on the 40 man roster ahead of Bell.

If he clears waivers, it will simply be a clerical issue.

But there is the thing.
Why have him clear waivers?

Sure at age 25 he looks like a classic Quadruple A player.
But he’s got talent. He was good enough to be a highly regarded prospect coming into this season.

What if a change works out for him?
What if an opportunity with a team that has a need in the infield says “Hey, we’ll give you a shot”?

Hell his original organization, the Dodgers, are playing Juan Uribe and Adam Kennedy at third. Each is in their mid 30s and not going to light up anything.

What about the A’s? Renato Nunez is years away from taking over third base. Josh Donaldson’s OPS+ is currently -42.

The Padres could have spot on their bench. So could the Cubs. And the Mariners.

I’m not saying he is going to be a star. But how many times do you see a talented player (which he evidently is) just need a chance to show his worth?

What’s the worst thing that could happen by claiming a top 100 prospect on waivers and forcing the Orioles to make a trade?

At age 49 years and 150 day, Jamie Moyer won a major league baseball game.
He pushed former Dodger Jack Quinn aside and set the record for oldest pitcher to win a game. (Quinn pitched one more season after getting that last win but couldn’t chalk up another W!)

So caps off to Jamie Moyer, an All Star and World Series champion and millionaire many times over.

I’ve written two pieces about Moyer that I want to dust off in this momentous occasion.

This January I wrote a 25 Man Roster consisting only of players who were born after Jamie Moyer’s big league debut on June 16, 1986. It’s not a bad roster with Buster Posey, Elvis Andrus, Justin Upton and Clayton Kershaw.

And in 2010, I wondered about the beginning of Jamie Moyer’s career. Had he just been mediocre in his 20s, we’d be talking about him for the Hall of Fame.

Congrats Mr. Moyer. May you break your own record many times over.