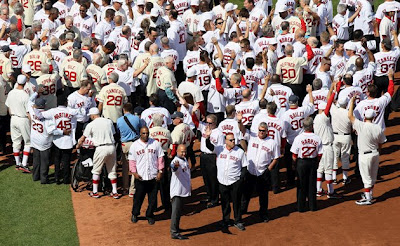 I wasn’t able to watch the 100th Anniversary celebration live.

So I went to MLB.com to check out the recording of it.

And they did indeed have a 23 minute long clip.

I was expecting goosebumps.

I was anticipating the roar of the crowd. I heard his ovation was tremendous. So was that for Bill Buckner, Dwight Evans, Pedro Martinez and of course Terry Francona.

Just the images of the players walking out to the clumsily edited clips of Field of Dreams and The Natural.

And worse yet, sometimes it was hard to recognize the players. There is a reason why people wear a nametag with their senior picture on it as a class reunion. It’s been a while since we’ve seen each other.

When a parade of 40-80 year old men come out, it isn’t always easy to figure out who they are. They’ve gained weight or lost their hair or grew out a beard or in someway their appearance has altered.

And the fun of an event like this is to see the players that maybe you forgot about. I listened to WEEI the other day and heard Joe Castiglione talk about how he loved catching up with Red Sox players like Dana Kiecker and Tom Bolton.

Now there are two players that I can’t say I’ve thought about any time recently, but it was cool to hear their names.

They were members of the 1990 AL East Champion Red Sox. Hearing their name brings back memories of chasing Toronto and Tom Brunansky’s catch.

Was Brunansky there? I have no idea. There were some players about his age wandering around, but unless they got a back shot where you could get a glimpse of their name, half the players were anyone’s guess.

How hard would it have been to put a caption on the players?
There were players from the 1950s and 1960s whose names I know but faces were never familiar to me.

I turned off the video.
How awful is that? I stopped watching the celebration because I felt so frustrated!

And would it kill anyone to post a list of all the players who were there?
Oh some articles very cleverly say “Red Sox players from Aase to Zupcic were at Fenway.”
Great!
Can I see the list please?
I can find the complete cast and crew list of Jaws 4: The Revenge in a manner of seconds and yet I can’t find a complete list of the players in attendance despite actively seeking it out.

I can’t be the only Red Sox fan who would want to see a list like this.

The ball was dropped today.
Let’s have a better showing for the 200th anniversary.