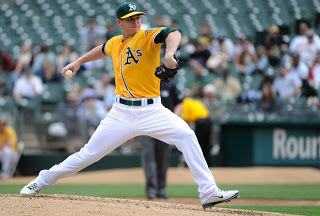 On May 1st when the A’s visit Boston, Oakland pitcher Jarrod Parker is scheduled to make his second start of the year.

The former first round pick was one of the keys in the Trevor Cahill to Arizona trade last winter and the 23 year old showed a lot of promise in his first start against Chicago.

But the minute he climbs on the Fenway mound next Tuesday, a strange statistical fluke will be no longer true. And I for one would like to point it out.

Last year, Parker pitched one regular season game for the Diamondbacks.
He started the September 27th game against the Dodgers and pitched well.

Then he was, to I’m sure his surprise, added to the Diamondbacks post season roster last fall. He pitched 1/3 of an inning in Arizona’s Game 4, series tying win against Milwaukee.

And last week he made his debut for the A’s.

I remember when the trade was made, I thought it was strange that Parker had appeared in as many post season games as he had regular season games.

Will we ever see that again?
Probably not.

If we do, will anyone but me notice?
Probably not.