The A’s have worn their green tops, gray tops and white tops.
It’s time for the yellow tops.

I love the yellow tops. It harkens back to the Reggie Jackson/Vida Blue/Catfish Hunter/Rollie Fingers years.

And it doesn’t say “Athletics”, which I always found to be a lame name.
They are the A’s, and the uniform says so.

And besides, the A’s clinched the AL West in those threads.

Break them out. Beat Verlander in bright yellow shirts. 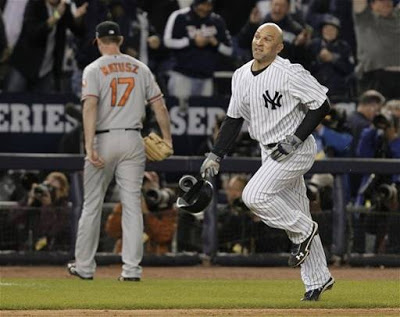 It would be irresponsible for Joe Girardi to start Raul Ibanez in Game 4 of the Division Series or any future playoff game for that matter.

And I am not saying this as a Yankee hater who posted the following Tweet last night.

No, if you are rooting for the Yankees, you need to have Ibanez on the bench.
Why? Because he has shown he is valuable coming off the bench as a threat. Lingering, waiting and having the ability to enter the game, tie it and win it.

He did it against the A’s on September 22. Game off the bench, homered twice including the 13th inning game tying shot.

He did it against the Red Sox on October 2. He pinch hit in the 9th and homered to tie the game. Then in the 12th he won the game with a single.

Last night he came off the bench, homered to tie the game and then homered to win it.

This is what he does. He’s like Dave Roberts with the 2004 Red Sox. Roberts was the looming threat of a stolen base when then needed it.

The Yankees can turn to the bench for a game tying homer.
You know he will do it when he pinch hits today.

Girardi might not be sure when he needs that homer.
Will he need to pinch hit for Chavez? Nunez?

Thinking he can do it for the whole game might be a fallacy.
But you know when Ibanez walks into the on deck circle, the crowd would go berzerk.

After a day and night filled with shocking homers, debates over benched pitchers, Cy Young award winners coming out of the bullpen, a three time MVP benched and his pinch hitter supplying a game tying and game winning homer, and the lowest paid team in the American League scoring three runs in the bottom of the 9th to stay alive… I’m supposed to concentrate on something other than baseball?

Is this a joke?

I live in California. It is 10:45AM as I am typing this. And guess what? The games have already started!

A potential 12 hours of baseball, two deciding games and the other two potential elimination games.

Baseball is the greatest sport there is. Last night and today is proof. Why?

Because the Giants played their guts out to stay alive, the Yankees stormed back to take control, the Cardinals broke the Nationals heart and the A’s had one of the great 9th innings EVER. When do they all play next? In less than 12 hours.

Take your Bye Weeks and and days in between games. Baseball playoffs are just better.