There is so much to say about last night’s debacle and soul crushing loss by the Washington Nationals. And frankly I don’t have the energy to write another post.

So here is a sampling of things I wrote on Twitter right afterwards. I guess there is wisdom in some of stream of conscious observations. 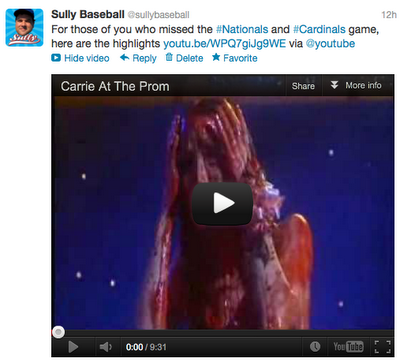 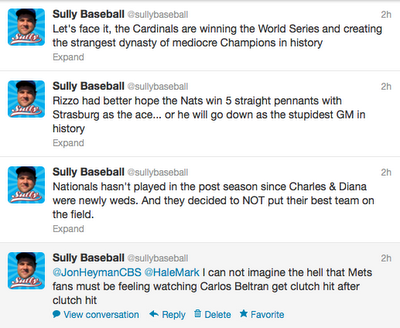 In 2010, I wrote a post about pitchers who threw a complete game victory to clinch the Division Series.

Since then, Chris Carpenter, Justin Verlander and CC Sabathia have been added to the list, so it was time to update this list.

In this day and age of specialized relievers, complete games have become more rare and pitchers finishing a clinching game is even less common.

But these pitchers pulled off the feat. And two were added this year. 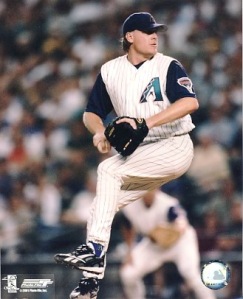 The 2001 Series didn’t end with Schilling on the mound getting the last out. The series ended with a walk off single by Tony Womack.

For sticklers of details, they played the Division Series in 1981 as well and two more complete games clinched series THAT year.

But while relievers were being used more frequently then, the whole specialization of EVERY bullpen role (and the cheapening of the save) didn’t come around until the late 1980s.

So Verlander and Sabathia did the trick this year. If they face off in the ALCS, it should be quite a battle.

There are so many emotions to process.
This has to be one of the great cataclysmic disasters in the history of baseball and a potential crusher for a franchise.

This was a lead lost and a bottom of the inning was all they had to turn things around.

And unlike ’86 and ’11 or even the Francisco Cabrera game or the final Game of the 2001 World Series, this was a collapse at home.

There was silence. Crushing silence.

I couldn’t help but think of Davey Johnson. He was in the other dugout in Game 6 of the 1986 World Series.

I bet he thought at one point “So THIS is what the Red Sox felt like that night.”

Meanwhile I am guessing the Giants will be favored in the NLCS. Why?
Exactly how many times do the Cardinals have to win series that nobody gave them a chance in before someone gives them a chance?

So the city of Washington still hasn’t had a post season series victory since 1924.
The Montreal Expos/Washington Nationals franchise is still without a pennant.

And those damn Cardinals are still alive.