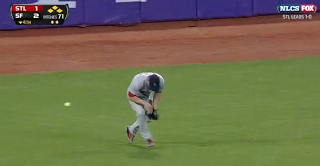 Things get really exciting in a Cardinals post season game when someone hits a fly ball to left field. Matt Holliday has become the most unpredictable trouble magnet in left since Manny Ramirez played with the Red Sox.

In last night’s 7-1 blow out by the Giants, the game was blown open when Marco Scutaro hit a two out bases loaded single to left field. (Earlier Holliday slid hard into Scutaro and eventually causing him to leave. Karma would strike Holliday.)

Two runs were going to score to make it 4-1. But the ball rolled through Holliday’s legs and another run came in.

And his strange day did not end there. In the 8th, Aubrey Huff hit a fly ball that hung in the air about about a week and a half. The infielder ran all the way out to left field while Holliday stood there. It dropped in.

Now Sam Holbrook would have called that an infield fly, but it was another adventure in left.

In last year’s World Series Game 6, he had a “I got it! I got it! YOU got it!” moment that dropped in between Holliday and Rafael Furcal.

Only the great Cardinals comeback put that into the background and made it an obscure footnote.

And of course there was the mother of left field miscues.

Game 2 of the 2009 Division Series. 2 outs and nobody on with St. Louis holding to a one run lead. With 2 strikes on the Dodgers’ James Loney, he hit a pop up to left field to end the game.

Except of course it didn’t.

Holliday dropped the ball and the Dodgers went on to rally for two runs and win the game.

The way the Cardinals were so invincible in 2006 and 2011 despite not having home field advantage, I can’t help but wonder if the 2009 team would have done the same if they went back to St. Louis 1-1 rather than 0-2.

Something else we will never know is what will happen when a fly ball is hit to Matt Holliday.

It makes the post season a little more exciting.

His fielding highlights should be edited to Yackety Sax, the Benny Hill theme