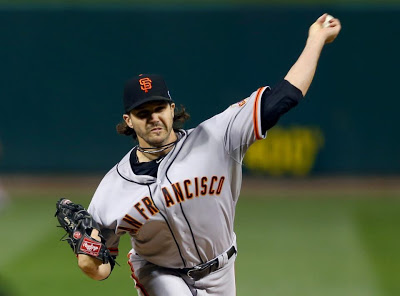 Show of hands.
Who thought that Barry Zito would throw shutout ball for 7 2/3 innings, look like the ace the Giants signed after the 2006 ALCS and possibly save the season.
Everyone who raised their hand is a damn liar.
I thought five innings and three runs would be a best case scenario.
Instead the man with the most notorious contract on the team was worth every penny, shut down the Cardinals, kept the bullpen fresh for Game 6 and bunted home a run for good measure.
The Giants still have an uphill battle to climb against the defending champs, but beating the Cardinals in San Francisco with Ryan Vogelsong and Matt Cain on the hill suddenly doesn’t seem so outlandish.
We are living in a world where Tim Lincecum struggles and Barry Zito dominates.
Well, anyway you can do it, Giants.
Nobody saw this coming.
Maybe it was the yoga.