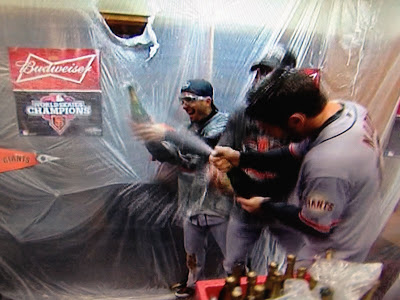 Before we wrap this season up with a nice bow, here are some thoughts on the finale.

– Supporters of Mike Trout for MVP must be having a field day with Cabrera getting a called third strike to end the series. “Trout would have at least swung and missed.”

– Supporters of Cabrera would be quick to point out that the Tigers had a grand total of one lead in the entire World Series: When he smacked a two run two out homer to take the lead. Then again the Trout supporters would say “Well, Trout would have hit a THREE run homer, made a home run saving catch, pitch a scoreless inning and revived someone in the stands who had a heart attack.”

– Throughout the game I was questioning Bruce Bochy’s pitching moves. I would not have let Cain pitch the 7th inning because I thought he looked gassed in the 6th. I would not have taken out Affeldt because he looked awesome and I hate taking a pitcher out with two outs and nobody on.

– In the end, it did not matter what I thought of Bruce Bochy’s handling of the pitching staff because, well… the Giants won the World Series. I guess that’s why Bochy is the manager and I am writing a blog.

– Speaking of Bochy, and we were, he should start working on his Hall of Fame speech. Six division titles, three pennants and two World Series titles say a lot.

Beating teams like the Randy Johnson 102 win Astros, Bobby Cox era Braves, Roy Halladay led Phillies, the Cliff Lee led Rangers, the Joey Votto Reds, defending World Champion Cardinals and neutralizing Justin Verlander, Prince Fielder and for the most part Miguel Cabrera and the Tigers should ad a lot to his prestige. He belongs in the Hall of Fame.

– I think Jim Leyland is a Hall of Fame manager but batting Quintin Berry second in Game 3 and 4 was a horrific disaster. He batted .000 and had an OPS of .111. And because he batted second, he had the second most chances to bat of anyone. Now I agree with Keith Law that Cabrera should bat second. But even if they wanted to keep him third, the fact that Jim Leyland pinch hit for Berry TWICE in the inning says everything you need to know. Put a batter in front of Cabrera who doesn’t need to be lifted in big situations.

– The fall of Jose Valverde also raised its ugly head last night. Coke was wonderful in the 9th inning, but Leyland brought him out again in the tenth basically because he could not trust anyone else. If Valverde was still effective, he would have been in that 10th inning and not Phil Coke who is a closer simply because nobody else could do the job.

– Santiago Casilla was the least impressive pitcher the Giants threw last night. Matt Cain may not have been stellar, but he was good enough to give them 7 innings and only three earned runs. Jeremy Affeldt was amazing striking out Miguel Cabrera, Prince Fielder, Delmon Young and Andy Dirks in a row. And of course Sergio Romo striking out the side. Casilla hits the first batter he faced and then got a grounder. Naturally it is Casilla who gets the win.

He’s played seven plus seasons in the majors and made a couple of million bucks and has two World Series rings. Must be a nice life.

– I feel very happy for Barry Zito. He got a World Series ring in 2010, but he was not on the roster not because he was injured but because he stunk. He didn’t stink in the NLCS nor the World Series. In fact he was one of the big playoff heroes.

– The Giants earned it. They won their Division, beat another Division Winner in a Game 5 on the road, beat the defending Champs and swept the team that everyone (including yours truly) picked to win. Nobody can say a bad thing about this squad.

No doubt somebody will.