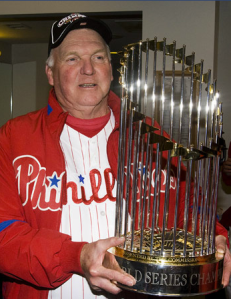 As reported in the Associated Press (via Yahoo Sports) , Charlie Manuel was relieved of his duties as manager of the Philadelphia Phillies and replaced by coach (and Baseball Hall of Famer) Ryne Sandberg.

General Manager Ruben Amaro cried during the press conference, probably remembering that he signed Delmon Young in the off season and his farm system was bare. And Manuel made it clear to all that this was not HIS decision.  He said “I didn’t resign.”

The greatest manager, in terms of wins and losses, was dumped unceremoniously and clearly not on his terms. The team that has experienced a rash of injuries and fading veterans has fallen far behind the Division Leading Braves. And with Sandberg in place and the 69 year old Manuel no longer guiding the team to victory, perhaps the end was indeed near.

Manuel has survived kidney cancer and bypass surgery for his heart. But his managerial career could not survive the free fall that the Phillies have gone through since Ryan Howard collapsed in a heap at home plate with a torn tendon to end the 2011 Division Series against the Cardinals.

Make no mistake about it. Charlie Manuel’s tenure with the Phillies was a success. The city of Philadelphia had not crowned a champion since the 1983 76ers won the NBA Title when Manuel filled the vacant managerial position before the 2005 season.

The City of Brotherly Love had become the neurotic “Woe is me” northeastern sports market, especially after the Red Sox relieved Bostonians of their suffering (if not their insufferability.)

More specifically with the Phillies, the team was one of the least successful franchises in baseball history. From the first World Series in 1903 through the 2004 season, the Phillies played in a total of nine postseasons. Only the 1915, 1950, 1980, 1983 and 1993 squads won pennants. The 1980 team was the lone champion, and that team was a Houston hit here or there away from losing the pennant.

Over 21 years, only the rough-around-the-edges 1993 team made the post season, and they are best remembered for walking off the field dejectedly after Joe Carter’s homer.

The Phillies were a franchise of failures. The epic collapse of 1964 and the playoff failures in the 1970’s and Mitch Williams seemed to define the team.

The Phillies were stuck in that neutral zone of being good enough to have a winning season, but not good enough to pass the Braves, who seemed to have a stranglehold on the National League East.

When the Braves finally faded, it looked like the Mets were going to be the Division Champ for years to come. Then Manuel’s squad put a stake through the heart of Met fans and changed the image of the Phillies’ organization.

Down 7 games to the defending division champion Mets with 17 games left in the 2007 season, Manuel guided his team to a sweep of New York and finished the season 13-4, clinching on the final day of the season.

The Phillies were not one hit wonders like their 1993 counterpart. For five straight seasons, 2007-2011, they won the Division each time. The franchise that had nine playoff berths total added five more with Manuel as manager.

In 2008, the Phillies doubled their World Championship total from one to two. In 2009, the team won back to back pennants for the first time in their history.

Philadelphia was no longer a city of losers. They had one of the marquee franchises in baseball. Stars wanted to come to Philadelphia. Cliff Lee even bypassed a richer contract with the Yankees to sign with the Phillies.

It was the greatest run the Phillies had ever experienced in their history. And it all happened under Charlie Manuel’s watch.

As great and as unexpected as the run was, there is an aura of slight disappointment as well.

The 2007 run for the Division, the 2008 title and the 2009 pennant raised the bar dramatically for expectations in Philadelphia. And with the addition of Roy Halladay in 2010 and his startling Division Series no-hitter to start the playoffs, the Phillies seemed poised to potentially reach a new height.

The could have achieved unquestionably the greatest run a Philadelphia pro sports team had ever had. With one more title, or at least another pennant, and this Phillies squad would have dwarfed any previous Phillies, 76ers, Eagles or Athletics team and even the Broad Street Bully Flyers.

They very well could still lay claim to that unofficial title, but an October let down here or there may have kept this squad from being considered as an all time great.

Perhaps the meltdown in Game 4 of the 2009 World Series and the image of Johnny Damon taking an uncovered third base in the 9th inning looms large in Phillies’ fans minds.

The image of Ryan Howard being called out on strikes to end the 2010 NLCS to a seemingly inferior Giants squad was memorable. The infamous “rally squirrel” in St. Louis and the symbolism of Ryan Howard collapsing to end the 2011 Division Series must haunt Phillies fans. So should the fact that the Phillies had a 4-0 second inning lead against the Cardinals in 2011’s Game 2 with Cliff Lee on the mound and could not hold the lead.

But the fact that those post season failures can be broken down shows what a dramatic change in Philadelphia sports culture occurred while Charlie Manuel managed the team. Before 2007, Phillies fans were hoping for a playoff berth that had been denied them all but one season since 1983 and not once since the 1994 strike.

As Manuel leaves, fans can lament that they could have won even more pennants and World Series titles.

Each team that eliminated the Charlie Manuel Phillies became the World Champion (the ’09 Yankees, ’10 Giants and ’11 Cardinals) with the exception being the ’07 Rockies who won the National League pennant.

At the very least, the pennant had to come through Philadelphia if not the World Series title.

Manuel’s successor Sandberg might have been a Hall of Famer on the field, but he has large shoes to fill as manager. Manuel did more than make an “also ran” into a winner. He changed the entire culture and expectations of a city that claims to have brotherly love but actually displayed cynicism for their many teams.

Philadelphia fans have experienced a recent championship. They should salute Charlie Manuel. He delivered more to Philadelphia baseball than any manager since Connie Mack.

He does not seem to want to walk away. Perhaps there is another city he can turn around somewhere. 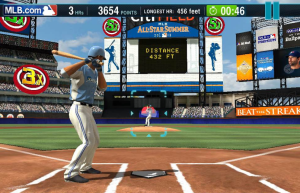 The Sully Baseball Daily Podcast previews the Red Sox/Yankees series, talks about A-Rod and wonders how his reputation could possibly be lower.

Then I play a video game and suddenly understand steroid users a little better.

To see the up to date tally of “Who Owns Baseball?,” click HERE.