It is the Sunday Request on The Sully Baseball Daily Podcast!

@sullybaseball What are your thoughts on the Phillies firing Charlie Manuel?

Charlie Manuel is out. Ryne Sandberg is in. And the sports culture of Philadelphia has changed.

I wrote about this topic on the blog HERE.

To see the up to date tally of “Who Owns Baseball?,” click HERE 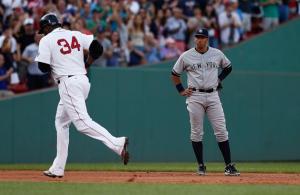 How does he do it?

Seriously. How does David Ortiz do it? He’s a more obvious juicer than me. I saw this guy when he was David Arias in the Mariners system. Yeah he had pop, but look at him now!

A pissed off David Banner didn’t go through a bigger physical change.

And not only does he not have his own fans boo him, not only does the media not get on him, but even YANKEE fans talk respectfully about him.

He hit big homers in the playoffs and World Series and nobody gets on him. I would get booed if I saved a kitten from a burning building.

Everyone is after me, and look at this guy. Ivan Drago would have an easier time passing a PED test than him and they let HIM give the big speech after the marathon bombing.

He dropped an F-Bomb and everyone cheers. I yell “Ha!” at a Toronto third baseman and it is front page news.

How does he do it?

And how does Andy Pettitte do it, while we are at it?

I should talk to my lawyer.