Each winning team for every post season game gets a pitcher and a hitter who earn a full WOO.

And at my discretion, I award a 1/2 WOO to a worthy player on the losing team.

Matt Holliday got a pair of hits including a massive 2 run homer in the 3rd inning that wound up being the difference in the Cardinals 4-2 win over the Dodgers.

John Lackey was magnificent, pitching shutout ball into the seventh inning. He finished with 6 2/3 innings, no runs, 4 hits, 8 strikeouts and no walks. He got the decision in Boston’s 1-0 heart stopping win in Detroit.

Carlos Martinez not only threw 2 key innings of shutout relief but also picked off Nick Punto at second base when the Dodgers were threatening to rally. St. Louis would hold on to win, 4-2.

Mike Napoli homered in the 7th inning and provided all of the offense of the game as the Red Sox beat the Tigers, 1-0.

Andre Ethier got on base three times and scored, giving the Dodgers some hope in their 4-2 loss to the Cardinals.

Victor Martinez was one of the only Tiger hitters whose bats were not totally dead. He went 2-4, including a single that put the go ahead run on base and the winning run at the plate in the 9th. The runs would not score and neither would Detroit who fell to Boston, 1-0.

Justin Verlander gave a performance on par with the other dominant Tiger starts in the ALCS. He finished with 8 innings, 4 hits, a single walk and 10 strikeouts. A solo home run in the 7th was his lone blemish, which was enough to lose the game 1-0 to the Red Sox.

END_OF_DOCUMENT_TOKEN_TO_BE_REPLACED

Both League Championship Series look like they can go a long way.

Today on The Sully Baseball Daily Podcast, I look at the two series that are now pretty interesting. And I praise Puig, I don’t bury him.

Confused what a WOO is? An explanation for Who Owns October can be found HERE.

An updated WOO tally can be found HERE. 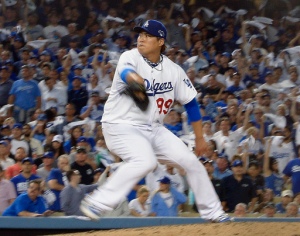 Each winning team for every post season game gets a pitcher and a hitter who earn a full WOO.

And at my discretion, I award a 1/2 WOO to a worthy player on the losing team.

Yasiel Puig may have styled a little too long, but his RBI triple gave the Dodgers a 2-0 lead. He would finish the game 2-3, contributing to the 3-0 win over the Cardinals.

Hyun-Jin Ryu came up big in a must win game for the Dodgers. Down 0-2 in the series, he gave L.A. 7 shutout innings, letting up just 3 hits and 1 walk, getting the decision in the 3-0 series saving victory over St. Louis.

Adam Wainwright pitched well enough to win most games. He threw 7 innings letting up only 2 runs and didn’t walk a batter. St. Louis’ offense betrayed him and he was saddled with a 3-0 loss at the hands of the Dodgers.