According to an Associated Press story by George Henry, the Braves are looking to build a new ballpark out of downtown Atlanta and into Cobb County.

Supposedly this will bring the Braves closer to most of its paying customers and would abandon Turner Field, which was originally the Centennial Olympic Park opened in 1996 (and transformed into a baseball only stadium in 1997.)

The idea of building the Olympic park for the Braves was to create a permanent modern home for the club. 20 years after the Braves played their first game there, they will move out, leaving the ballpark empty (much like Stade Olympique in Montreal.)

I have been to a game in Turner Field. I went to see Greg Maddux pitch against Curt Schilling and the Philadelphia Phillies in a thrilling match up at the start of the 1998 season. It is a nice place to see a ballpark. It doesn’t quite have the personality of AT&T Park nor Petco Park. But it is a pleasant park with good sightlines, wide concourses and provides the fans a solid experience.

And it is doomed to just sit there and decay like an abandoned gas station before finally the wrecking ball (or dynamite) finds its way to the spot where the Olympic Games were held.

May I make a modest proposal? Instead of blowing it up, can it be transported? Sure it would be a pain in the ass to move, but I see buildings moved about. 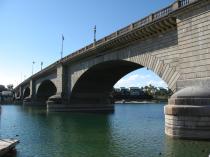 Hell, even London Bridge was moved from England to Arizona.

So why can’t a stadium be moved?

So instead of wasting a relatively new ballpark, why not pick it up and transport it the 2,469 miles from Atlanta to Sacramento California.

Stop at Sacramento and make one last pitch for the Giants and A’s to make an agreement over San Jose.

If they agree that the A’s can move to San Jose, the stadium is dragged to San Jose (best to take 880 and avoid any of the bridges.)

If not, and it probably won’t happen, then proceed the final 95 miles from Sacramento to Oakland and bring Turner Field, the one time home of the Atlanta Braves, to the Coliseum complex.

Where to you put it?

There is plenty of room in the parking lot to plop a ballpark down. Dig a big hole on one side or another of the current O.Co Coliseum and drop Turner Field right in there.

Make a few adjustments, put down some new sod, connect the sprinklers to the hoses, make sure there are no sewage issues and BAM!

The A’s have a good solid baseball only stadium to call their own.

The Giants don’t have to strike a deal with San Jose.

The city of Oakland won’t lose their baseball stadium.

And maybe they can knock down the current Coliseum and build a football only park for the Raiders while they play in Berkeley in the meantime. (Having Raider nation enter Hippie Berkeley 10 weekends a year is to delicious to pass up.)

Will there be enough room to park?

Sure, because the time will come to knock down the Oracle Arena. The City of Oakland has had plans for a complex featuring a baseball, football and basketball arena. But the Warriors are already going to skedaddle to San Francisco in a few years. And the Bay Area has a great indoor arena in San Jose, the San Jose/Compaq/HP/SAP Pavillion/Arena or whatever the hell the Shark Tank is called these days.

So there will be parking and a ballpark and football stadium exist side by side. (Maybe a Bowl game or a Super Bowl could make their way to the East Bay as well.)

Would it cost less to drag an already built stadium across the country than to build a new one?

How many roads would have to be blocked to pull off this move?

These are questions I don’t have the answers to. We have a few years to figure this out. But look me in the eye and tell me having Turner Field in Oakland isn’t a worse scenario than dragging out the Coliseum controversy.

Exactly. Let’s call some hauling companies and get on this. In 5 days Turner Field could go from Atlanta to Oakland.

And why not Tampa, which is only 455 miles away?

They need a roof. Come on! This plan has to be realistic!

He talked about his career, the A’s, having two Champagne celebrations in three days and an interesting story about Josh Donaldson and his knowledge of a pitcher he faced in a critical game.