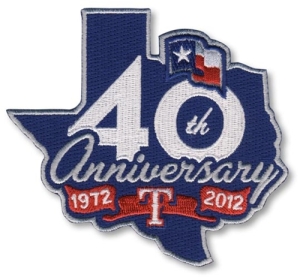 The Texas Rangers is an odd franchise. And the history never saw an opportunity slip away like the 2012 team.

As I wrote in my Home Grown vs. Acquired entry for the Rangers, the team has had multiple MVPs (Burroughs, Pudge, A-Rod and Juan Gonzalez who won it twice) and memorable managers (Whitey Herzog, Billy Martin, Bobby Valentine, Kevin Kennedy, Johnny Oates and Buck Showalter) and some great pitchers (Bert Blyleven, Fergie Jenkins, Nolan Ryan and Kevin Brown back when he was awesome.) Plus other terrific hitters (Rafael Palmeiro, Will Clark, Ruben Sierra) and one of the great baseball names ever (Oddibe McDowell.)

But before the 2010 post season, they had won a grand total of one game. Not series… GAME.

That all changed under President Nolan Ryan and manager Ron Washington. In 2010 led by Cliff Lee  and Josh Hamilton, they beat the Tampa Bay Rays in the Division Series, their first post season series victory.

Then they took on the Yankees, who had beaten Texas in a heart breaking 1996 Division Series and then made quick work of them in 1998 and 1999. The Rangers stunned the defending World Series champs only to fall short against Tim Lincecum and the San Francisco Giants, who had their own World Series demons to slay. 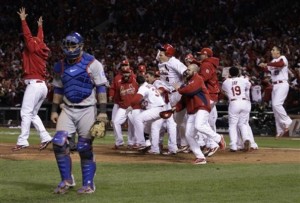 Undeterred, the Rangers made it back to back pennants when they beat the Rays and Tigers in October of 2011.

The team recovered from losing Lee to free agency and won a franchise record 96 games and faced the Cardinals in a heart stopping World Series.

In Game 6, the Rangers got to one strike from winning the World Series in the 9th and 10th inning, only to see the lead slip through their fingers both times.

Nelson Cruz’s ill timed leap of David Freese’s flyball could have been the final out. Instead it became a game tying triple. Lance Berkman tied it with a single in the 10th and Freese clocked the walk off homer in the 11th. Despite taking an early 2-0 lead in the finale, the Rangers fell short again and the Cardinals were the champs.

When 2012 began, the Rangers were a team on a mission for their 40th anniversary in Arlington. They had a chance to be the first team since the Joe Torre Yankees to win three straight pennants. Now they needed to get that final strike.

They spent over $100 million to acquire Yu Darvish from Japan. They also imported Joe Nathan to solidify the bullpen.

Josh Hamilton got off to a torrid start and Adrian Beltre had an MVP worthy season.

The Rangers went 17-6 in April and after a .500 May, surged forward with a 19-9 June. They took the lead early and despite some challenges from the Angels looked like they were going to cruise to the Division Title.

A 9-14 July and a stunning winning streak by the A’s made the West race interesting, but the Rangers righted  the ship by winning 19 games in August. On August 12, they had a 6 1/2 game lead and looked like the team to beat in the American League.

They had more depth than the aging Yankees and better firepower than the star studded Tigers. Wild Card contenders Baltimore and Anaheim didn’t have the depth. And the Oakland A’s were contenders in theory only. The young upstart team would eventually fade away.

Except they didn’t. And when Josh Hamilton’s body started to give way, the Rangers started to slump. But time was certainly on Texas’ side. They still maintained a 5 1/2 game lead on September 6th and still had the best record in the American League.

But the A’s, who had already leap frogged the Angels, just would not lose. And even while the Rangers were taking 2 out 3 from teams, their lead would steadily shrink.

When the Rangers split 4 games in Arlington against Oakland, they maintained a 4 game lead with six to play.

The season ended with the Rangers in Oakland. They had already clinched a spot in the Wild Card game but this was a team with bigger ambitions. They needed a single victory to clinch the AL West and have home field advantage in the Division Series and ALCS.

In the first game, the A’s and Rangers went back and forth before Sean Doolittle, Ryan Cook and Grant Balfour shutdown the once mighty Texas bats for a 4-3 Oakland win.

With that win, the A’s eliminated the Angels and punched their ticket to the Wild Card Game. But in order to win the Division, they would have to win the next two games.

Josh Hamilton doubled home Ian Kinsler in the third inning to give the Rangers a 1-0 in the second game. It would be their only lead of the day.

An error by Nelson Cruz in right field allowed the A’s to take a lead they wouldn’t relinquish. Now game 162 saw the two time defending AL Champion Rangers face the bargain basement Oakland A’s. The winner of the game would be the AL West champs, a title that the Rangers had all but sewn up just a few days earlier.

The Oakland magic seemed to run out in the third inning. The Rangers, who looked angry that the season had come to this, unloaded on A. J. Griffin. By the time the damage was over, Texas was up 5-1 and could cruise to the Division Title.

But in the bottom of the fourth, the A’s fought back. Doubles by Josh Reddick and Coco Crisp plus hits from Josh Donaldson and Seth Smith tied the game.

And then it happened. A routine flyball to Josh Hamilton with two outs was the end of the A’s rally. And he missed it. Whether he lost it in the sun or he misjudged it, the result was the same. The ball squirted away from his reach and the A’s took the lead, 7-5.

The A’s added on, but the Rangers hopes died with that flyball. Oakland swept the series and won the AL West.

The stunned Rangers played a one game Wild Card playoff with the Orioles. The year that looked like it was a lock for a third straight pennant was now reduced a “win or go home” face off in Arlington.

Yu Darvish, who did not pitch in the Oakland series, was not his best against Baltimore and the Orioles won 5-1.

One bounce going their way and the Rangers franchise would be lined up for a third straight World Series trip and possibly the chance to redeem the 2010 and 2011 squads who fell just short.

Instead the ball scooted away from Hamilton, who would depart bitterly from Texas in the off season.

The Rangers fell just short in 2013 as well, playing a one game elimination playoff to get into the one game Wild Card playoff and losing to the Rays.

But no team had the chance to define the legacy and history of the Rangers quite like the 2012 team.

And that great opportunity was missed in Texas.

The Rays need to do something about their stadium situation.
Nobody likes the Trop. It is ugly and inconvenient.

Moving the team would be tricky as there are few places that can support a team left and even fewer places with a baseball facility.

Talking about it with a friend, I thought San Antonio would be a decent place. Then I also suggested Charlotte.

The San Antonio Rays sounds odd. Then I said “Charlotte Rays” out loud and it hit me.

Charlotte Rae! The great character actress from Diff’rent Strokes and The Facts of Life! Edna Garrett!

It is too perfect. They can be the Charlotte Raes! There is a football team called the Buffalo Bills, so why not the Raes?

And how is that a dumber name than “Devil Ray”?

Make the move and make the change.

It is time for a new blog series for Sully Baseball.

This series is called “Great Missed Opportunity” and like most things Sully Baseball, it will be detailed and cover all 30 franchises.

The premise of this series is that every team has had a year where they put together a good solid team that if they won it all, they’d be one of the most loved teams in their franchise’s history.

And each of these teams came short of winning the pennant and have retreated into obscurity, revered by only the biggest die hard fans.

Now I have set up two parameters for the series.

1. THE TEAM CAN NOT HAVE LOST IN THE WORLD SERIES.

People tend to remember pennant winners (OK, most people anyway) and even teams that came up short in the World Series gave their fan base the thrill of winning the pennant.

2. THE TEAM MUST BE IN THE WILD CARD ERA.

In other words all of these teams are from 1995 to present. If 20 years have passed, it is time to move on. Now that has created some problems for the Royals, Blue Jays and Pirates entries, but I want to keep these entries fairly recent and where the wounds are relatively fresh.

I’ve already written the first entry in the series, one for the 2006 Minnesota Twins. You can read that by clicking HERE.

So brace yourself fans. There are going to be some painful memories coming and a few teams you may have forgotten about that make you think “Wow, that WOULD have been a great team to see win it all.”