Collusion is a dirty word in baseball. But maybe the writers can get together and make sure the 2015 Hall of Fame class all set. Let me explain.

Hall of Fame class 2014 is elected for this summer. And despite grumblings about Maddux not being unanimous and Clemens and Bonds stretching out for another year and Jack Morris falling off of the ballot, it was a damn good class.

After last summer with no living new members, we are going to celebrate Bobby Cox and two of his aces, Tom Glavine and Greg Maddux. Plus Frank Thomas, Tony LaRussa and Joe Torre. People from New York, Chicago, St. Louis, Atlanta and Oakland all will have reason to show up.

It would have been nice to see Houston fans there as well cheering their 3,000 hit man Craig Biggio. He fell just 2 votes shy of induction. And while some idiots did not vote for him in 2013 because he was a first ballot player, there was no excuse to leave him off this year.

Twitter was soon flooded with voters who confessed wanting to vote for Biggio but could not because of the 10 limit rule.

Craig Biggio missed Hall of Fame by 2 votes. I didn’t vote him b/c 10 is max. He was 11 on my ballot. Time for BBWAA to change max rules?

I am not one to call for kneejerk rule changes.

But I AM in favor of people talking to each other. So this is a plea to the writers out there: Get together and discuss your ballots.

Seriously, this isn’t a Supreme Court decision nor the election of a Pope. You are deciding who gets honored in a ceremony in the summer. But a lot of people love this process and a lot of fans enjoy the ceremony (and the chamber of commerce in Cooperstown, NY is depending on it.)

We all know who is going to be on the ballot in 2015. Why NOT get the writers together and talk it through?

What crime would be committed? If someone knew that a vote here or there would mean someone getting into the Hall or not, or possibly falling off the ballot, perhaps a writer wouldn’t waste a vote on the Jacques Jones or J. T. Snows of the world!

Biggio should have been elected in 2013, let alone today. He was not and because of that, we will have another crowded ballot for next year.

The new candidates for next year include Pedro Martinez and Randy Johnson, two obvious choices who belong in.

Now The Big Unit deserves 100% of the electorate. I believe it is important to eventually have someone get all the votes. It will end the silliness of “If Babe Ruth wasn’t unanimous then nobody should” malarkey.

Poll the writers. See who ISN’T voting in Johnson. Have them justify their decision amongst you.

It’s is January. The ballots don’t need to be returned until the end of December. There are 12 months to hash this out.

Make sure enough are voting in Pedro as well. We don’t want to have another “Robbie Alomar waiting another year” fiasco.

If you are mad about Don Zimmer, remember than the Gerbil was running at HIM!

Next get a sense of who is voting for whom. And that gives the writers a chance to weed through the ballot.

John Smoltz will be making his debut on the roster and probably will join his teammates Glavine and Maddux.

Gary Sheffield will be there, but has BALCO baggage. Nomar Garciaparra will be on, whose peak was super high but not very long. Carlos Delgado had an underrated career but will fall short.

The likes of Darrin Erstad, Jarrod Washburn and Tom Gordon will be one year and done. Nobody is throwing Alan Embree and David Weathers a vote.

Will Biggio and Piazza get enough votes? If you hear that he probably isn’t, maybe you adjust your ballot accordingly.

Wouldn’t mind seeing McGwire and Sosa off of the ballot, making the moral conundrum a little lighter? Then make your case to those supporting him.

Think Tim Raines or Mike Mussina are getting short changed? Pitch them.

Want to make the decision on Clemens and Bonds once and for all, either in or out? Make it happen.

Did you see the movie Lincoln?

How did he get the 13th amendment passed? Did he do it by making stoic speeches and having people tremble at the sight of honest Abe?

No! He had to collude! Deals were struck. Trades were made. Sleeves were rolled up. And more was on the line in that than a Hall of Fame ballot.

So this is not the same as the owners colluding in the 1980’s to prevent free agent movement.

THIS is collusion to make sure the Hall of Fame election has the best possible result. Maybe a few “I’ll make sure Biggio is on my ballot if YOU make sure Piazza is on yours” compromises can be made.

Why not? How is that harmful? How is that worse than saying “Damn it, if I knew it was going to be that close, I’d have voted for him?”

Sometimes you have to break a few eggs to make an omelet.

So think about it, Hall of Fame voters. Give each other a call. It is what Abe Lincoln would have wanted.

It is the Hall of Fame election episode of The Sully Baseball Daily Podcast.

Greg Maddux, Frank Thomas and Tom Glavine are all in (seen here in some of their more obscure uniforms.)

Biggio was left off and some people left Benitez on.

The Morris debate is over but the need for a unanimous entry remains. 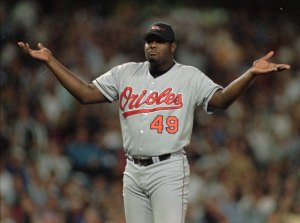 The most hated and least reliable big game reliever I ever saw in my life got a single vote for the Hall of Fame.

A man who Orioles fans hated, but not as much as Giants and they didn’t hate him as much as Met fans, received a vote to sit along side Sandy Koufax and Willie Mays and Mike Schmidt.

I believe whomever voted for him should be brought in front of a senate subcommittee to explain themselves.

The only acceptable reasons would be:

1. It was a joke.
2. They were drunk.
3. Armando Benitez was holding his children hostage.

Any other reason will be invalidated.

If you are that writer, please send me an e mail to info@sullybaseball.com and we can discuss it on my podcast.