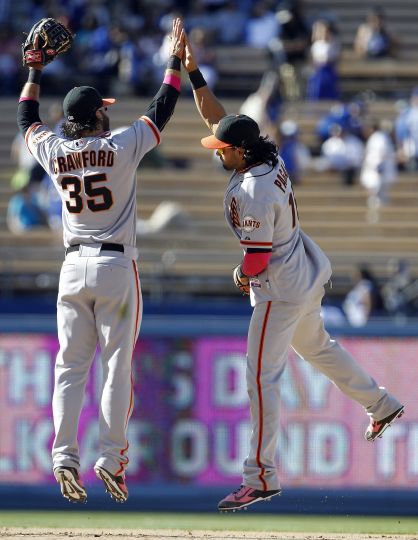 The Tim Hudson – Clayton Kershaw match up was everything we could ask for. So was the drama of the Giants and Dodgers game. Homers, great plays, a dramatic Hanley Ramirez homer, a Puig shot all set up the Giants 3 run 10th.

The Giants and Dodgers have played each other 10 times. The Giants have won 7 of them. They won’t meet again until July.

They play each other 9 more times. The Giants just needs to win 3 more games and they will have clinched the season series, which is all anyone could have asked for to start this season.

For one day, Pablo Sandoval found his stroke and the Giants beat the Dodgers in 10 innings, 7-4.

John Lackey shut down the Rangers bats and the bullpen took care of the rest for the Red Sox, 5-2.

I would figure out the Giants magic number, but Mad Men is coming on soon.