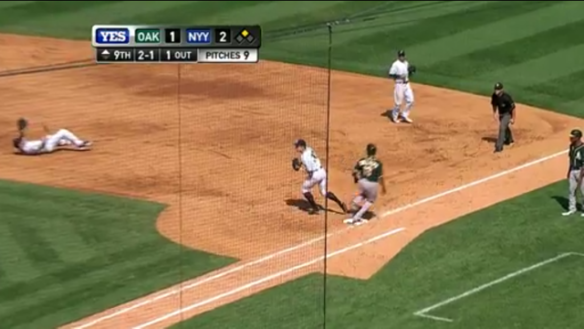 Last night when the A’s came back from a 4-0 hole, they really looked invincible.

And today they took a 1-0 lead against Tanaka, a sweep was all but certain. They kept the Yankees off the board save for a pair of solo shots. They kept putting men on. They had 2 on and nobody out in the 8th with Donaldson, Moss and Cespedes coming up. EVERYTHING was set up for yet another A’s come from behind win.

They couldn’t score in the 8th thanks to an Ichiro sliding catch and they couldn’t tie the game in the 9th when a potential game tying single hit David Robertson and went to first base.

Alas not every comeback ends with a victory.

Last night the Giants got a shocking homer by Juan Perez to pull a comeback against the Reds. The Red Sox? They came back only to drop it in the 12th.

Let’s get to the updated Dodged Bullet/Teeth Grinder tally.

Juan Perez of all batters launched a 2 run shot that helped the Giants comeback against Cincinnati, 3-2. DODGED BULLET

Cespedes homered twice and Donaldson added one to win on Wednesday 7-4. They dropped the game 2-1 despite many opportunities offered by the Yankees. DODGED BULLET AND TEETH GRINDER

Ortiz hit a go ahead homer and the bullpen kept the Indians from walking off until Asdrubal Cabrera hit a walk off shot in the 12th to beat the Red Sox 7-4. TEETH GRINDER

Red Sox and Tigers were both swept. Something has to give in this ALCS rematch.