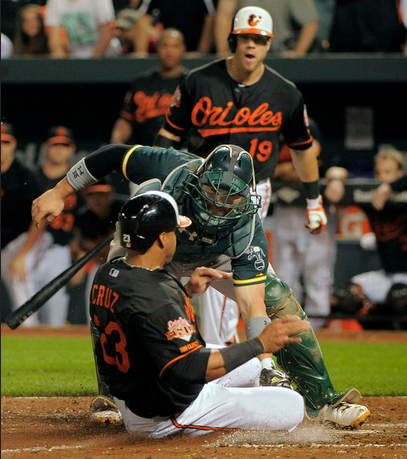 You are not going to see a 10th inning quite like what happened in Baltimore.

Fernando Abad was on the mound in a tie game and a runner on. Along the way, the Orioles made a bunt play, using up an out to move a batter from first to second. That isn’t my favorite play in the world, but you already knew that.

Then an intentional walk to Nelson Cruz set up Abad, a lefty, versus Adam Jones, a right hander who crushes left handers. Jim Johnson was warm, but Bob Melvin left in Abad.

The move didn’t work because Jones got a base hit to right field and Nick Markakis, who was bunted over to second so he could score on a hit, couldn’t score on a hit. Moss threw out Markakis. The call was challenged but confirmed.

Then the A’s shifted like crazy and Nelson Cruz decided to take an 88 foot lead. Chris Davis was at the plate.

Then… Nelson Cruz… tried to steal home. Abad stepped off, threw to Derek Norris, and was nailed.

The A’s scored in the 11th and took the game. Abad got the win, only the second in his big league career.

Think about that inning. How many things can be individual pet peeves for a fan?

Not scoring from second on a hit?

Not bringing in a righty to face a righty?

Giving a pitcher a win even though between the bunt and the two runners thrown out, he couldn’t take credit for retiring a single batter?

All in one inning.

The Red Sox lose and the Giants win… Let’s get to the updated Dodged Bullet/Teeth Grinder tally.

Matt Cain’s bid for a second no hitter was foiled by the Metsin the 7th. Buster Posey’s homer made the Giants 4-2 winners. DODGED BULLET

The Orioles had 2 runners thrown out at the plate in the 10th and Stephen Vogt drove in the winning run for the 4-3 A’s win.

The losing streak continued for the Red Sox as a close game was broken open with a 2 run 8th as the Tigers won, 6-2. TEETH GRINDER

A’s and Orioles go at it again. There is no way it gets this odd tomorrow night.