God forbid the Red Sox, A’s or Giants played a normal run of the mill game this weekend.

Don’t get me wrong, I enjoy any series against the Yankees that the Red Sox win despite dropping the first game to Nuno and had the spectre of Tanaka looming in Game 2.

And seeing the A’s pull off a sweep on the road is no easy feat.

It would be nice seeing the Giants NOT blow a 9 1/2 game lead in 3 weeks, something I didn’t think was physically possible.

But MAN, baseball this weekend took a lot out of me.

The A’s were the ones who fell behind this time.  But a Freiman home run and a gritty Milone performance made the difference as Oakland swept the Marlins in Miami, 4-3. DODGED BULLET

Homer Bailey took his bid for a third career no hitter into the 7th. The Giants made several boneheaded plays in the 9th to help the Reds turn a 1-0 game into a 4-0 shutout. TEETH GRINDER

The Red Sox could never pull away from the Yankees. The Yankees could never tie the Red Sox. In the end, David Ortiz’s homer and the wildness of the Yankee bullpen were the difference in Boston’s 8-5 win. DODGED BULLET

The Red Sox are creeping to .500 and break even in this tally.

Can they make something of this year?

The bad news for the Giants is they are in the middle of a historic free fall.

The good news is they have half a season to right the ship. First move they need to make? Remove Sergio Romo from the closer role.

It is a “Don’t Panic or Panik” episode of The Sully Baseball Daily Podcast. 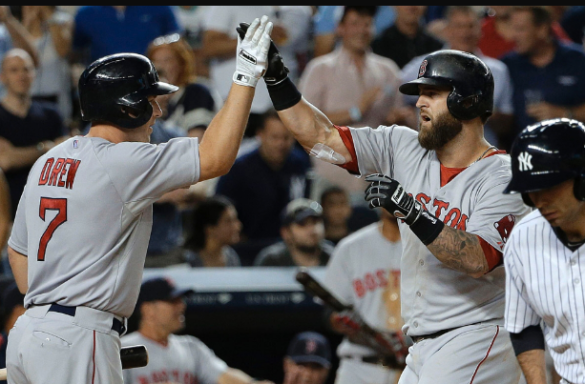 Well it certainly wasn’t a BORING day for the Red Sox, A’s and Giants.

Jon Lester and Masahiro Tanaka locked horns in an epic pitching match up in the Bronx. With 2 outs, 2 strikes and nobody on, Mike Napoli untied it with a homer and Koji Uehara locked it down for the Red Sox. That’s the clutch (and possibly idiotic.)

The A’s took a big lead, coughed it up, took another lead, had a rare run scored off of Sean Doolittle, then saw the game turn into a marathon resting on the arm of Jim Johnson.

Somehow they won. That’s the lucky.

Matt Cain pitched wonderfully. Buster Posey slammed a game tying 9th inning double and they were 3 outs from winning and had the winning run on 3rd with nobody out. And somehow the Giants not only lost but wound up losing by 4 runs and witnessed their lead in the West almost evaporate. That’s the aggravating.

Sergio Romo coughed up a 2 run 9th inning homer that spoiled Matt Cain’s terrific game. Buster Posey tied it in the 9th but the Giants could not put the winning run across. With 2 outs in the 11th, the Reds scored 5 runs and took the game 7-3. TEETH GRINDER

The A’s once again let a 4 run lead slip away and the Marlins tied it in the 9th. But a marathon game and great relief from Otero, Johnson and Francis and some two out hits in the 14th gave Oakland a 7-6 victory. DODGED BULLET

Lester vs. Tanaka was all that anyone could hope for in a pitchers duel. But with 2 out, 2 strikes in the top of the ninth, Tanaka tried to slip a fastball past Napoli. What an idiot! Red Sox won in the Bronx, 2-1. DODGED BULLET