A. J. Pierzynski evidently ticked off a lot of his former Boston teammates by staring at his cellphone a lot in the clubhouse. I guess Red Sox players don’t spend a lot of time in Starbucks when everyone is staring at their iPhones all day.

Either way, the Red Sox had their second walk off win in as many days with A. J. gone. This time it took a no hitter breaking rally to take the lead, a replay going against them and Koji blowing another save before Mike Carp won the game.

The Red Sox are younger. The Red Sox are more exciting. And they are perfect since dumping A.J. Granted, it is a small sample size, but I will take it.

Meanwhile in San Francisco, the A’s clobbered the Giants and continue to show why they are the best team in baseball.

The Red Sox rallied for a 3-1 lead. But an overturned call and a blown save by Koji sent the game into extra innings. Mike Carp’s pinch hit single beat the White Sox for the second walk off in as many days, 4-3. DODGED BULLET

I’m not saying the Red Sox are going to repeat. But a team like this is a lot more fun to watch.

PHOTO BY BECK DIEFENBACH/SPECIAL TO THE SAN FRANCISCO CHRONICLE

The current Giants squad has nothing to prove nor accomplish to ensure an historical legacy. The A’s need to make the World Series NOW.

How we remember our great teams is painted entirely in October.

It is a legacy episode of The Sully Baseball Daily Podcast.

END_OF_DOCUMENT_TOKEN_TO_BE_REPLACED 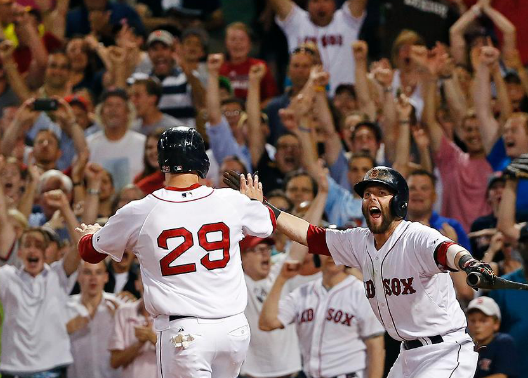 The Red Sox have decided to wave the white flag in this season, but they are doing it in a smart way.

They are spending the second half of the 2013 World Series defense as early Spring Training for 2015.

Come to Fenway Park and see the Pawtucket Red Sox play in the majors! And I am all for it. And yesterday the Baby Sox came through.

Granted, they ALSO got help from David Ortiz, Dustin Pedroia, Jonny Gomes and Koji Uehara, but who is keeping score.

Jason Hammel lost his debut with the A’s, who could not mount a rally against the Giants bullpen and fell 5-2. TEETH GRINDER

The Giants finally got off the matt with Cain’s second win of the year and Pence’s bat sunk the A’s, 5-2, and put San Francisco back into a first place tie. DODGED BULLET

Chris Sale dominated the Red Sox into the 8th. But Chicago’s bullpen imploded and Daniel Nava tied the game in the 9th and Brock Holt had Boston walk off 5-4 winners. DODGED BULLETS