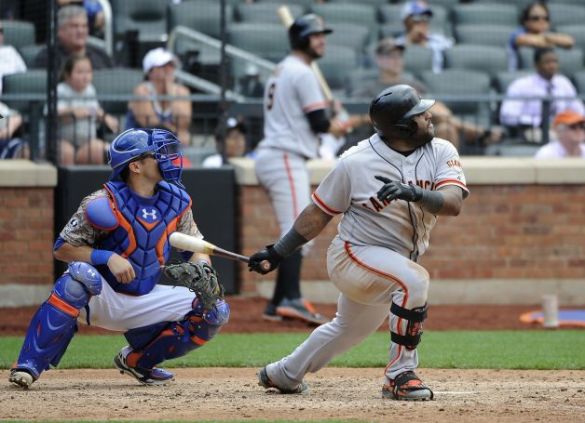 There would be miserable Giant fans today if it weren’t for Pablo Sandoval. The Giants played a matinee at CitiField against the Mets. If they lost, the series would be a split.

That is borderline inconceivable when you saw how the Giants clobbered the Mets on Friday and Sunday.

And things did not look good when the Mets took an early lead. Instead Sandoval hit a 2 out, 2 run double in the 3rd to tie the game and a 2 out RBI double in the 9th to give them the lead.

Instead of thinking about a lost opportunity in Queens, they walked away with 3 out of 4 games.

Win the games you can. Don’t let the Dodgers pull away and the Division is still within grasp.

Thank the Panda for that today.

Sean Doolittle’s shovel pass to Derek Norris in the top of the 9th prevented the Rays from taking the lead on a squeeze play. Norris would finish the game with a 2 out, 2 strike walk off RBI hit in the bottom of the 10th, giving the A’s a 3-2 win. DODGED BULLET

This tally includes the A’s and Red Sox teeth grinders from this Sunday.

Meanwhile the Giants should consider a strange suggestion I have about Barry Bonds.

That and my plea to ESPN to stop showing Red Sox and Yankees games in this episode of The Sully Baseball Daily Podcast.