Bud Selig is out and Rob Manfred is in as commissioner of baseball.

What is Bud Selig’s legacy?

What should Rob Manfred’s focus be on?

And how do I tie it into the VHS release of Raiders of the Lost Ark.

It all makes sense on today’s episode of The Sully Baseball Daily Podcast.

END_OF_DOCUMENT_TOKEN_TO_BE_REPLACED 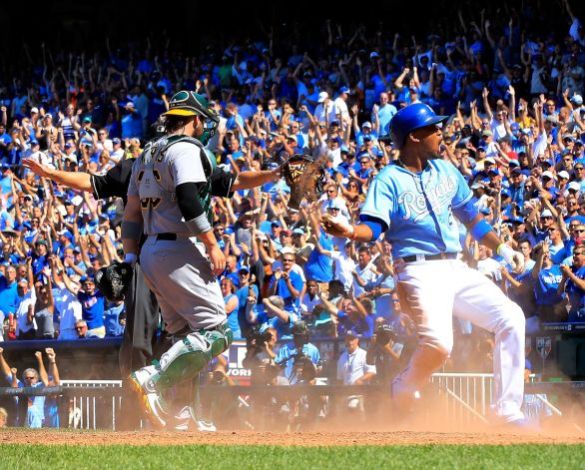 The A’s don’t want to face the Tigers again. They are bad news for Oakland.

The Kansas City Royals, who have not participated in playoff ball since the 1985 World Series, have stormed their way to the top of the AL Central.  And by the way they played the A’s, maybe Oakland would rather play the Tigers again.

The A’s looked like they were going to get a win today and a split series, thanks in part to a sun aided triple by Josh Reddick. But a 5 run outburst in the 7th by the Royals was the difference, 7-3.

The Royals are a streaky team. Maybe the A’s caught them on an uptick. Maybe they won’t be so tough in October.

A 5 run rally in the 7th sunk the A’s in a division leader showdown against Kansas City, 7-3. TEETH GRINDER

Down 4-0 early, the Red Sox tied Houston thanks in part to Will Middlebrooks single. The Red Sox would pile on 7 runs in the 6th to win, 9-4. DODGED BULLET

The Giants and Phillies match up tomorrow. If this were 2010, it would be a great match up.