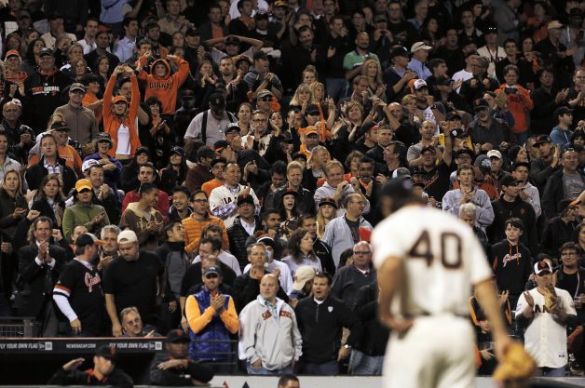 A day after one one of the most frustrating losses of the year, Madison Bumgarner threw a near masterpiece.

7 perfect innings, helped by a towering Buster Posey homer, and Giant fans could imagine it. Imagine ANOTHER no hitter at AT&T Park. If Bumgarner threw one, then every single San Francisco starting pitcher from the 2010 World Series would have one (Jonathan Sanchez, Matt Cain and Tim Lincecum all have at least one in the bank.)

In the 8th, he let up a double to Justin Morneau, the hitter who as of this post has the highest batting average in the National League.

He went on to retire the final 6 batters. He finished with a complete game, 1 hitter, 13 strikeouts and no walks. That’s a line worthy of Sandy Koufax or Grover Cleveland Alexander or Pedro Martinez or Randy Johnson. The Giants got their much needed 3-0 win.

I called my father, the biggest Giants fan I know, to get his take on this fabulous performance.

“What did you think of Bumgarner, dad?”

“What was he thinking? Stupid pitch to Morneau. Got that hit off of it. Bad bad pitch.”

Bumgarner went the distance, gave the bullpen the night off and threw a masterpiece, retiring 27 of 28 batters. My dad focused on the one batter he DIDN’T get. Tough crowd. Tough tough crowd.

Chris Carter hit a 3 run homer that gave the Astros the lead in the 8th and held on to beat the A’s, 4-2. TEETH GRINDER

Madison Bumgarner missed a perfect game by letting up one hit in the 8th. The game was 0-0 until Buster Posey hit the first of his two homered in the 6th. The Giants would top Colorado, 3-0. DODGED BULLET

A battle of bullpens stretched into the 11th inning when the Red Sox erupted for 7 runs, including a massive homer from Mike Napoli. The Blue Jays would score 3 of their own in the bottom of the 11th but it wasn’t enough and the Sox won, 11-7. DODGED BULLET

Let’s try to avoid any stupid pitches today, shall we? Especially with a perfect game on the line.