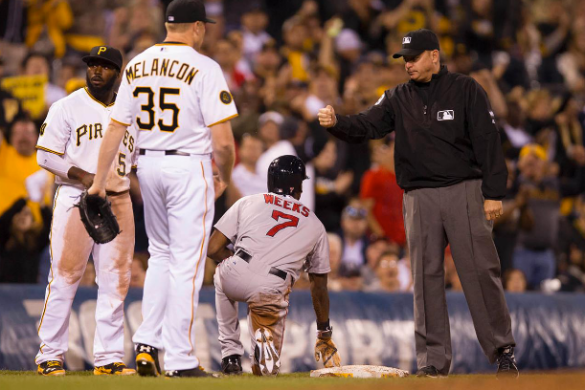 Baseball is a sport where so much is tied to chance.

In close games, the difference between winning and losing is a bounce here or there. A tiny piece of timing goes one way instead of another and a losing team can be a winner.

This year, not so much.

Last night, the Red Sox were rallying in the 9th inning, down by a run, with Jemile Weeks on third base representing the tying tun.

Will Middlebrooks chopped one towards third. Weeks tried to get out of the way of the ball.

It hit him barely in fair territory.

Instead of a game tying single it was a runner out at third base, rally all but killed.

Not that this game meant a lot to the Red Sox, it did to the Brewers, Cardinals and Pirates.

A slightly different bounce and the Red Sox are playing spoilers.

Instead Weeks gets hit… and I’ve never seen that happen in a 9th inning rally before.

Rangers complete an improbable sweep with a 4 run first and squashed any big rallies as the A’s lost 7-2. TEETH GRINDER

A ball hits Jemile Weeks in fair territory, derailing a 9th inning rally and sending the Red Sox to a 3-2 loss in Pittsburgh. TEETH GRINDER

OK, A’s. How about winning some games and not making this a fruitless exercise?