Even this bitter Red Sox fan has to admit that Derek Jeter’s finale in New York was pretty cool.

The narrative of the last at bat was perfect, even if the build up to it was obnoxious.

WFAN’s Jason Keidel joins the podcast to discuss Jeter, narratives of baseball and what is next.

Derek Jeter (who else?), Pablo Sandoval, Hiroki Kuroda, Edinson Volquez, Coco Crisp and Yasmani Grandal  all added to their totals for Who Owns Baseball?

END_OF_DOCUMENT_TOKEN_TO_BE_REPLACED 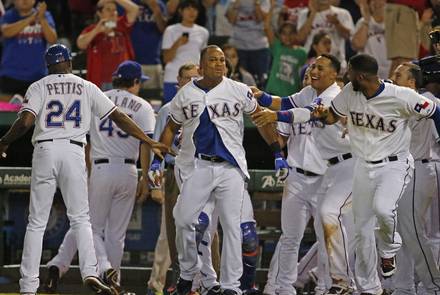 ANOTHER one run loss? ANOTHER pitching performance flushed down the toilet?

MORE runners  left on base?

Coco Crisp got on base 5 times. FIVE TIMES! And scored zero runs. I didn’t think that was even possible.

So despite the fact that the Seattle Mariners have done a complete and utter nose dive in the last week or so, they remain mathematically in the race. So let’s make this simple, shall we?

Angels beat the Mariners ONCE.

A’s beat the Rangers ONCE.

Those two things happen and the A’s have Jon Lester pitching the Wild Card Game. And for everyone’s sake, do it tonight!

Meanwhile the Giants clinch in an empty stadium in Cincinnati with a Brewers loss… and found a way to have a wild weird game at AT&T.

The playoff bound Giants blew an early 6-0 lead to the limp Padres bats. But Pablo Sandoval and company came back to win, 9-8. DODGED BULLET

Coco Crisp gets on base 5 times and never scores. The A’s lose a walk off 2-1 heart breaker to Texas. TEETH GRINDER