I want Louisville pitcher Kyle Funkhouser to be drafted by the Boston Red Sox. My reasoning may be unorthodox, but that does not make it wrong.

The baseball draft, now laboriously called the Major League Baseball First Year Player Draft, is less than a month away. And as happens every year, experts forecast team’s needs and try to determine who had a good draft or not. This is always a labor of insanity. Some picks are high school players and will not see the big leagues for another 3 or 4 years minimum. Other are college players who may or may not make the transition.

Unlike football and basketball, the players rarely make an impact on the big league level right away. (The exceptions like Brandon Finnegan of the Royals are considered freakish.) And while the #1 pick over all can sometimes become a superstar (A-Rod, Griffey, Chipper Jones and Adrian Gonzalez were all #1) more often than not they turn into good solid players with a few star seasons (Harold Baines, Darrin Erstad, Justin Upton, Shawon Dunston) and every once in a while a bust (Shawn Abner, Matt Bush, Bryan Bullington.)

Drafting for need is crazy and projecting the future is nearly impossible.

That being said, I know exactly who I want the Red Sox to draft. After a rotten 2014, the Sox have a high pick, going 7th overall. Keep in mind Frank Thomas and Clayton Kershaw were both #7 overall picks, so a star can be picked up in that slot.

According to the Baseball America Mock Draft, and they know more than me on this topic and probably more than you, John Manuel has the Red Sox picking LSU Shortstop Alex Bregman. The Sporting News also predicts Bregman, with his sweet right handed swing and aggressive play, will join the Red Sox organization.

With Xander Bogaerts and Yoan Moncada already in the system and Dustin Pedroia getting older, maybe it is the right move. Maybe he will be a big star for the Red Sox. Maybe he will be a trade chip for the next big move that will win another title. Plus he is friends with Red Sox phenom catcher Blake Swihart, for whatever that is worth.

All that being said, I don’t want them to draft Bregman. I want Funkhouser.

The mock drafts have the Louisville right hander going 8th to the White Sox, so the projection of talent is not way off. It is not like I am urging the Red Sox to draft someone who would be available in the third or fourth rounds. Scout.com writer Jim Ellis projects the 6’2″ starter to be an “innings eater with some front of the rotation potential.”

The Sox need pitchers who can eat innings and frankly they might be harder to find than solid middle infielders.

But the main reason I want Kyle Funkhouser is because I am a Red Sox fan… and I want to hear Sox fans yell “FUNK-HOW-SAH!!!” whenever he gets a big out. Not since No-MAH GAH-see-ah-PAH-RAH has a name seemed so perfectly suited for Masshole fans to chant.

First of all his name starts with Funk. There are too many great things can come from that. Funk music as an intro. When he gets batters out, they are in a Funkhouser. If he strikes out a bunch of batters, he can bring in the noise, bring in the Funk. Days he is pitching, Boston becomes Funkytown. (Too be fair, anytime you give Red Sox fans a word that begins with F-U and ends with K, you are playing with matches.)

Next his name ends with Houser. The OW sound is always excellent when being chanted by drunks. Finishing with the unpronounceable “SER” makes the name a regional rallying cry.

The Red Sox are seeing the need for pitching depth as they struggle to get their nose above .500 and avoid their 3rd losing season in 4 years (sandwiched around a World Series title where the pitching was strong.)

A nice homegrown arm taking the ball every 5 days would be nice, even if it takes a few years to develop him. And with that name? Trust me, in a few years the New England accent will still be there at Fenway. A bunch of drunk Sox fans from Newton or Framingham will still be screaming and that name will be beloved.

No scouting report will show that. But think of the Jersey sales. Think of how he could become a fan favorite.

Seriously, unless Bregman gets a cool nickname, he will never have the Red Sox cult hero potential of Funkhouser!

Do it Boston. I don’t want Chicago taking the joy of yelling FUNK-HOW-SAH!!!! 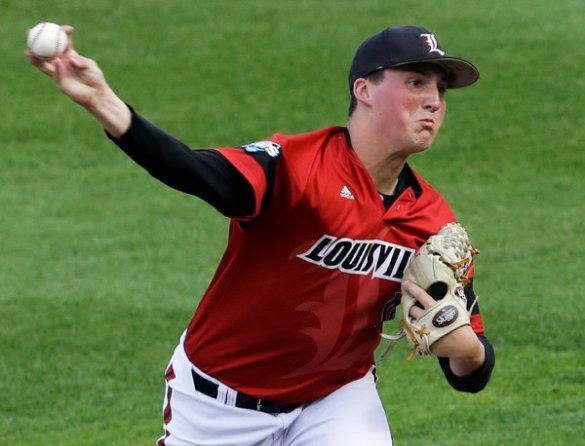 With so few teams truly out of contention, the 2015 season could be the perfect time for the Phillies, Braves, Brewers and Rockies to stock up in their farm system.

Make trades thinking of quantity over quality. That worked for the A’s and Astros!

That and a few passing references to Tom Brady on  Episode 931 of The Sully Baseball Daily Podcast.