So the EARLIEST the World Series can end is on Halloween?

It could go as late as November 4th?

This is total insanity, and this is coming from a baseball fanatic.

It is a “Let’s Keep our Seasonal Games Seasonal” episode of The Sully Baseball Daily Podcast.

Franchises can not choose their identity. They can only win games to try and reverse bad perceptions. And the Washington Nationals are staring at decisions made 3 seasons ago that continue to haunt them in 2015.

Remember how easy a pick the Nationals were at the beginning of the season?

The team that won a National League best 96 games was returning basically in tact and was adding Cy Young contender Max Scherzer to the mix. Remember when Bryce Harper asked Scherzer “Where’s my ring?” during spring training? There was a sense of bravado about that prediction that had some teeth to it.

Yeah they were bumped out of the Division Series last year. But that was kind of a fluke as the Giants were on a roll and that 18 inning game set the tone of the series.

Nobody was beating the Nationals in the East. The Braves were in flux, the Phillies were a mess and the Marlins needed EVERYTHING to go right.

And of course the Mets are the Mets. No threat.

The Nationals stumbled out of the gate but righted the ship in May. An 8 game hole on April 27th became a 1 game lead on May 20th. It was a 4 1/2 game lead in July.

Since July 5th, the Washington Nationals have the worst record in baseball. Over a 35 game stretch, they won 12 and lost 23.

It is mid August and the Nationals are a sub .500 team. They need to go 24-21 the rest of the way to have a winning season, forgetting any hope of a return date in October. The Mets of all teams are starting to pull away with the Division Lead. The Diamondbacks are now tied with the Nationals.

All this in a year where Bryce Harper is a legit MVP candidate and Max Scherzer threw a no hitter and is having a fine season overall.

There are lots of factors. Only Harper and Yunel Escobar have been hitting. The Papelbon trade has led the to unravelling of Drew Storen. Doug Fister has been a huge let down.

Matt Williams, who was terribly out managed in the post season of 2014, seems to have the team tighter than a drum and in the recent sweep by the Giants, they looked dead. And his managerial decisions can sometimes be head scratching worthy. (How many times has Michael Taylor batted lead off?)

And of course Stephen Strasburg has been a let down as well. 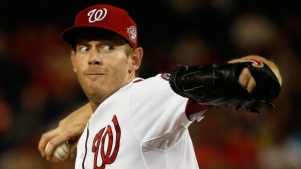 It always comes back to Strasburg, doesn’t it?

Nationals fans hate it when people bring up Strasburg.

Tough luck. You don’t get to choose your team’s identity nor brush away the dark clouds that hang over the franchise.

It isn’t fair that everyone, including yours truly, will bring up the Nationals shutting down Strasburg in the 2012 post season. But sometimes baseball isn’t fair.

It wasn’t fair when every Red Sox player was asked about the Curse of the Bambino until 2004 came around.

It wasn’t fair that the Pirates were asked about Francisco Cabrera and the 1992 NLCS all of those years until they made the post season again.

Think it is fair that anyone asks Joe Maddon a question that includes the word “Billy Goat”?

Fair has nothing to do with it. The Nationals did not field their best team in the 2012 post season because they were keeping their eye on 2013 and beyond. They had Stephen Strasburg on a strict innings limit and stopped pitching him in September, despite the fact that he was pitching like a star and Washington DC was on the verge of their first post season since 1933.

Like in 2014, the Nationals had the best record in the NL. Like last year, the pennant was their’s for the taking and a Wild Card team was their first obstacle.

All season, I wrote article after article begging the Nationals to adjust Strasburg’s innings so he could play in the post season.

There had to be a midground between ending his season and wearing his arm down like Mark Prior and Kerry Wood.

The Nationals didn’t see it that way. They were aiming for multiple titles with Strasburg leading the way. Like Harper this spring training with Scherzer, the Nationals are quite good at cashing in their World Series titles before they win them.

Washington of course met St. Louis in the 2012 Division Series. The Nationals’ starting pitching was horrible and the worn out bullpen blew the lead in Game 5.

If the Nationals went down to St. Louis but at full strength, nobody would bring it up.

Instead, they did not field their best team and when then manager Davey Johnson saw his staff fall apart, Strasburg was not an option.

With Jordan Zimmermann and other players undoubtedly going to test the free agent waters, the Nationals window for being a pennant winner is shutting rapidly.

And the truth of the matter is Stephen Strasburg might very well be a fine big league pitcher but not the dominating superstar that everyone thought he was going to be.

His All Star campaign in 2012 might have been his high water mark, the year he did not pitch in the playoffs.

The lesson to learn, and perhaps the Mets and the Cubs are learning from it as I type this, is the window to win a title might not always coincide with your well laid out plans.

The Nationals did not expect to win in 2012. The Phillies, Marlins and Braves all looked better in theory. But the Nationals ran away with it. Had Strasburg been shut down with the Nats in third place, nobody would have given it a second thought.

Instead they turned possibly their best shot at a World Series into dress rehearsal.

They did not go for it because it did not match their time table.

Now there is a distinct chance that this group may never win their pennant. And that decision will loom over the team until thei do advance.

No, but when has baseball been interested in being fair?