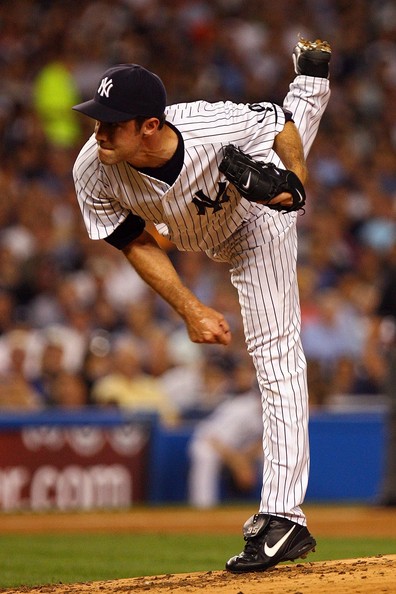 Mike Mussina joined the Yankees after they won the 2000 World Series. He retired after the 2008 regular season. That means his 8 year tenure with the Yankees was perfectly bookended with World Championships that he did not participate in.

Oddly, he never seemed to be embraced by Yankee fans despite some fine seasons. Perhaps his never getting a ring with the team hurt his cause. (Although Kenny Rogers, Denny Neagle and Jose Canseco all won rings with the Joe Torre Yankees and they are not exactly beloved members of the franchise.)

And in his first year with the Yankees, 2001, he put together a pair of performances that showed he was able to produce when the Yankees needed him the most.

His first post season start for the Yankees was Game 3 of the Division Series. The A’s were up 2-0 in the series and looking for the sweep. With the season on the line, Mussina threw 7 shutout innings (the final out recorded on “The Jeter Flip.”) Had Mussina been roughed up and did not match Barry Zito’s 8 inning, 2 hit performance, there would not have been any of the post September 11th World Series drama in the Bronx.

After a win in the ALCS against Seattle, Mussina was clobbered in Game 1 of the World Series in Arizona. His chance for redemption came in Game 5.

Tino Martinez and Derek Jeter hit their dramatic homers that turned Arizona’s chance to take a 3-1 lead into a tied 2-2 series. With Schilling already used in Game 4, Diamondbacks started Miguel Batista. He was more than up for the challenge, keeping the Yankees off the board over 7 2/3 innings.

Mussina could not afford to let up a big rally to the Diamondbacks. Despite their flair for the dramatic, the Yankees offense was stagnant against Arizona pitching. They were 1-24 with runners in scoring position going into the 9th of Game 5.

In the 5th inning with the game scoreless, Mussina allowed home runs to Steve Finley and catcher Rod Barajas. But they were both solo shots and the score was 2-0.

Mussina allowed only 3 other hits over the course of 8 innings. The night after an emotional extra inning game, Mussina was doing his best to take the pressure off of the bullpen, wiggling out of a first and third pickle in the 8th. He struck out 10 along the way and kept the Yankees in the game.

Finally he gave way to Ramiro Mendoza in the 9th, still on the hook for a tough luck loss. Scott Brosius came to his rescue with his 2 run homer off of Kim in the 9th. The Yankees would ultimately win in the 12th when Alfonso Soriano singled home Chuck Knoblauch. Reliever Sterling Hitchcock was credited with the win but it was Mike Mussina’s performance that set it up.

The Yankees would lose the World Series in the 9th inning of Game 7. But the likes of Jeter, Soriano, Martinez and Brosius were all long remembered for raising the spirits of the heart broken city. Mussina’s heroism would not be noted as a contributor to a title. His relief performance in the Aaron Boone game also never seems to be brought up.

His contributions are not lost on this author, making him the unsung hero for November 1.