The football playoffs are starting and there are some playoff teams who do not have a single player I can name.

But I always watch the NFL in January and I do so through a baseball prism.

Thinking of the Boys of Summer in the Dead of Winter on The Sully Baseball Daily Podcast.

For those of you who do not know what the Suffering Index is, here is my explanation.

END_OF_DOCUMENT_TOKEN_TO_BE_REPLACED 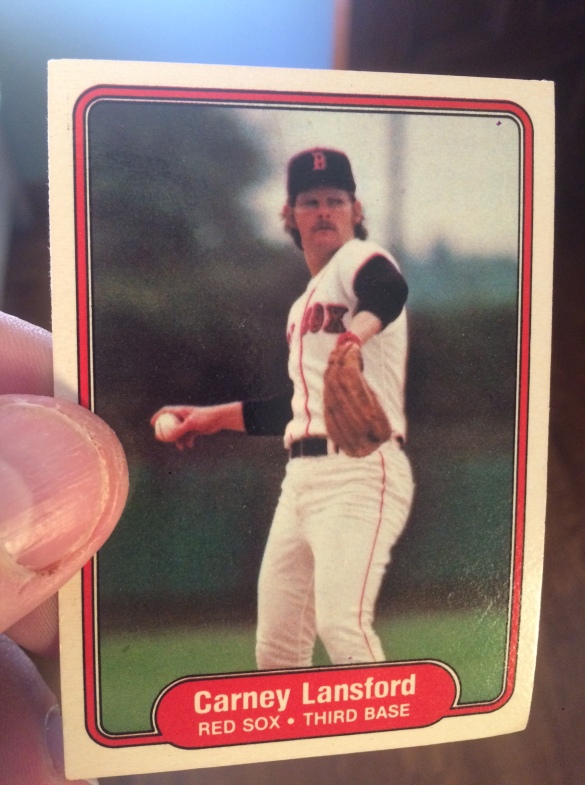 I had a complicated relationship as a Red Sox fan with Carney Lansford.

You see, if you have been following these blog entries about my baseball cards, you might have found out that Butch Hobson was my first favorite Red Sox player. He was the third baseman and he wore number 4 (before it was retired for Joe Cronin.)

Then, after the 1980 season, the Red Sox made a pair of trades with the Angels. Butch Hobson (along with Fred Lynn, Steve Renko and Rick Burleson) were Angels. A bunch of players, including Carney Lansford, were off to Boston.

I understood that players got traded. And I wasn’t devastated when Butch Hobson left. I had seen friends move and I had moved. But that didn’t mean I had to love the replacement.

Lansford wore number 4, like Butch, and played his position. But it seemed wrong. Butch Hobson sounds like an athlete. Carney Lansford sounds like a soap opera character.

Now Lansford was demonstrably better than Butch. My boy Hobson played one injury plagued season in California before Steinbrenner brought him to the Yankees for a cameo. By 1982, his big league career was over.

Meanwhile Lansford won a batting title in 1981 and remained a solid player in 1982. The emergence of another third baseman, Mr. Boggs, made Lansford expendable and was sent packing to Oakland for Tony Armas, who won a home run title two years later.

Lansford, who is a direct descendant of Sir. Francis Drake, became a mainstay on the A’s, homering in the A’s 1988 ALCS sweep of the Red Sox and playing in the 1989 Earthquake World Series. I never liked those A’s teams. I guess I always had an issue with Carney Lansford.

This card is one of the bizarre 1982 Fleer editions, which I wrote about in this blog post from 2009.

Fleer was new to the card world and they all came out fuzzy, out of focus and usually with strange awkward pictures. Lansford taking infield practice at Spring Training is not exactly an action shot.

Certainly not enough to turn me into a Carney Lansford fan.