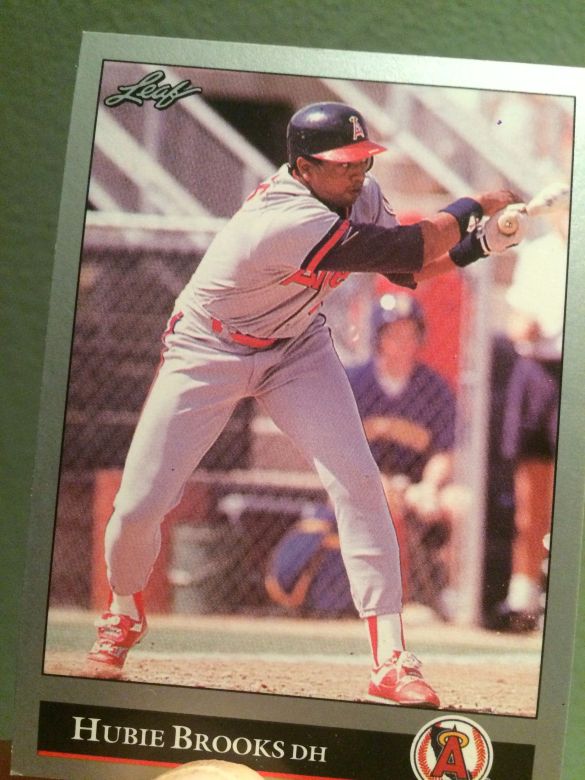 But there it was, sitting in the shoebox in my closet.

Let me be more specific.

My baseball card collecting became more sporadic once I went into college. I would still buy packs of cards, but it was no longer the obsession that it was for me while I was in high school. I was no less of a baseball fan, but I knew I couldn’t arrange baseball cards in my dorm room in New York University the way I could have in my bedroom back home in Palo Alto.

But the early 1990’s was a strange time for baseball cards. More companies started coming out of the woodwork publishing sets of cards. It was no longer just Topps, Fleer and every once in a while Donruss. Upper Deck and evidently a company called Leaf got into the game.

I have no memory of Leaf cards. I do not know if they still exist or not. But somehow I got a pack of Leaf. And before you ask, no, I wasn’t drunk when I bought it. I don’t drink.

As perplexing as the make of the card and its placement in my shoebox is California Angel DH Hubie Brooks. I don’t remember him.

Oh I remember HUBIE quite well. It was him as an Angel that did not resonate. If a brain cell of mine retained the information that Hubie Brooks played for the Angels, then that memory has been suppressed.

Between the June draft and the secondary January draft, Brooks was selected 5 time before finally signing with the Mets in 1978.out of Arizona State. (His teammate Bob Horner was picked first.)

In the minors he bounced between third base and shortstop, but he could flat out hit and by 1980 had made the big league club.

In 1981, I attended my first Mets game and I remember Hubie Brooks and Mookie Wilson were both young players on that not so good team. The fans loved them. They played hard, played well and had cool names.

Hubie became the Mets third baseman, went on a 24 game hitting streak and moved to shortstop when Ray Knight arrived. Then he was a key part of a blockbuster trade that brought Gary Carter to New York from Montreal.

With the Expos, he became the top slugging shortstop in the National League, twice making it to the All Star Game.

Then he bounced between the Dodgers in 1990 and back to the Mets to replace departed right fielder Darryl Strawberry in 1991.

And, evidently to Baseball Reference and this card, he wound up on the Angels in 1992.

Nope. No memory of that.

He played 82 games and struggled, not making much of a dent while playing with an eclectic group as Ken Oberkfell, Alvin Davis and Tim Salmon. He also was teammates with Mike Fitzgerald, the former Mets catcher who was one of the other players in the Gary Carter deal to Montreal.

After 1992, he played a few years in Kansas City, was released a few weeks before the 1994 players strike and his career was over.

Over his 15 year career, he had some fine seasons and played with some good teams. But not one of his 1645 major league games were in the post season. He never got to play in October and build up some long term memories.

Maybe if the 1992 Angels made the playoffs I would have remembered Hubie played there.