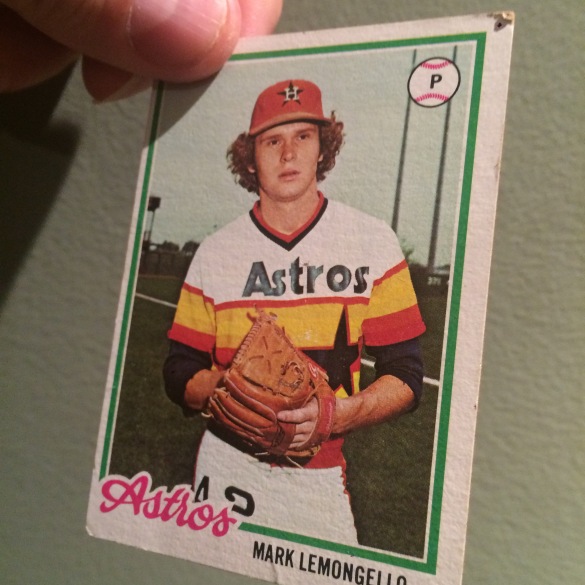 For some reason my post I wrote for March 15 and Eric Byrnes was deleted and lost for all time. So if you are keeping score at home, you would be under the impression that I did not write a Card of the Day.

Now I have to rewrite the Eric Byrnes post but to keep things equal in the universe, I will do a second Card of the Day post for today.

It is an oldy but goodie as Mark Lemongello is here with his orange uniform, orange hat and orange hair in all of its glory.

On Episode 1,281 of the Daily Podcast, I broke down the insane tale of Mark Lemongello and his cousin Peter Lemongello.

Lemongello (pronounced le MAHHHNJ uh low) was a solid prospect in the Astros organization in the mid 1970’s who earned a call up in 1976.

Also in 1976, his cousin Peter was trying to make a mark (no pun intended) as a soft rock crooner. He was ahead of the curve with an infomercial for his album that was supposed to skyrocket him to stardom.

By 1977 Peter made a few TV appearances and Mark was throwing 200 plus innings for the Astros.

But Mark’s temper (as shown in the YouTube clip below) would get the better of him. And while he was good for 210 1/3 innings in 1978 and a decent 3.94 ERA, he was wearing out his welcome on a rising Houston team. He was dealt to Toronto for Alan Ashby before the 1979 season.

And Peter’s sales dropped and he wound up in the Real Estate world in Florida.

Mark’s time in Toronto was short and his career ended in the minors. That’s when things got strange.

Peter’s real estate dealings were more than shady. He was put on probation for charges like arson and insurance fraud and bribery.

Then in 1982, Peter and his brother Mike, a professional bowler, were forced at gun point by a pair of kidnappers into a van and forced to withdraw $50,000 in cash.

Guess who one of the kidnappers was?

It became clear that there was some connection to Peter’s debts to insurance companies but in the end, the heat fell on Mark who pleaded no contest and was put on probation and no doubt had very awkward family barbecues.

So let’s review. A corny 1970’s crooner turned Florida real estate arsonist was kidnapped along with his professional bowler brother by his cousin, a former major league pitcher with a temper. 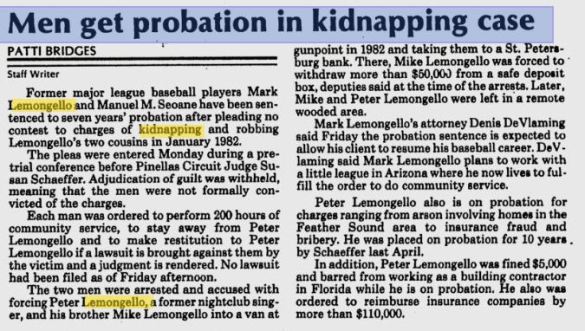 And enjoy the podcast episode originally posted on April 26, 2016. 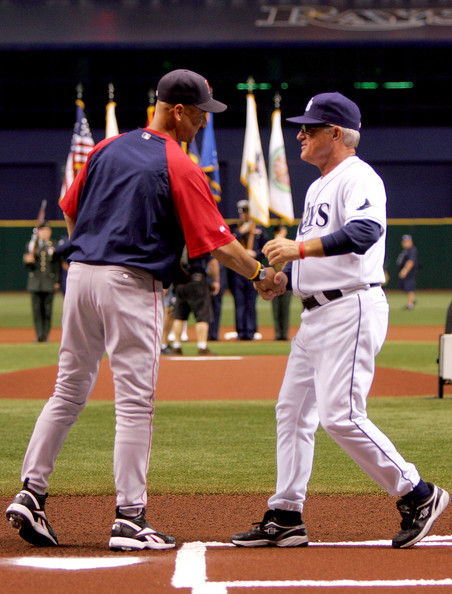 What managers are currently worthy of making it to the Hall of Fame? Which managers will get over the hump if they win the 2017 World Series.

It is a resume padding episode of The Sully Baseball Daily Podcast.

END_OF_DOCUMENT_TOKEN_TO_BE_REPLACED 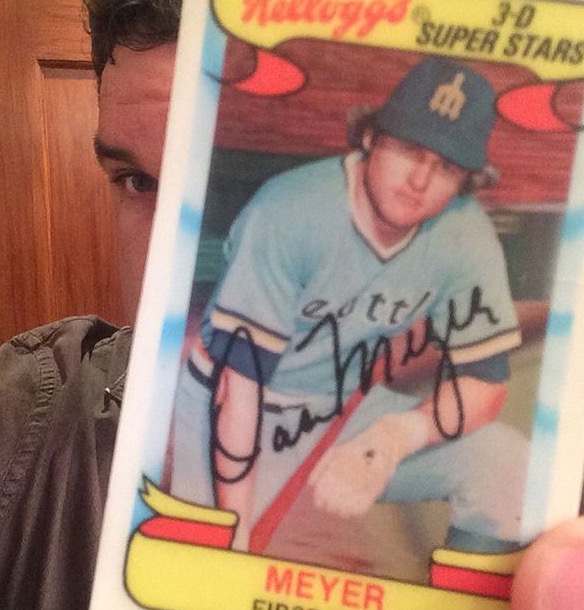 There are a bunch of the Kellogg’s 3D All Stars in this shoebox. And evidently Kellogg’s and the real All Star Game have something in common:

Every team needed to be represented. I have no quarrel with that in the world of 3D cards. If I grew up in the Pacific Northwest and had a poorly playing new expansion team, I’d want to have at least one ray of hope landing in my bowl of Frosted Flakes.

Rupert Jones was the Mariners representative in the actual All Star Game in the inaugural season. Now why HE didn’t get the Tony the Tiger treatment is unclear.

The former Santa Ana College standout was a fourth round pick by the Detroit Tigers in 1972.

He put up big numbers for Bristol in 1972 and had decent power numbers in Lakeland in 1973 and a high average for AAA Evansville in 1974, earning him a call up.

In his two full seasons for the Tigers, didn’t show a lot of power, didn’t walk much, didn’t steal many bases and had a medicore average, which is redundant when you think about it.

So after a pair of nondescript seasons for Detroit, he was exposed in the expansion draft to fill the rosters of the new Toronto Blue Jays and Seattle Mariners.

Ruppert Jones was the first pick. Bob Bailor, who would also get the 3D treatment, went second to Toronto.

Meyer, now converted from second base to the outfield to first base, went 9th. He went 0 for 4 in the first ever game played by the Mariners, a 7-0 loss to the Angels.

Through April 15, he was batting .176 and posting an OPS of .459. He fared a little better in May and June but was hardly setting Seattle ablaze. Meyer started hitting in July, capping his best day on July 26th. He hit a 3 run homer off of Minnesota’s Tom Burgmeier, finishing the game with 5 RBI and raised his OPS to .769.

He had a solid August as well and finished the year with 22 homers, 90 RBI and a .273 average, the only stats anyone looked at back then.

So here he is with the sweet old school Mariners trident and the powder blue away unis and being treated like an All Star in 3 dimensions. He would hit 20 homers again in 1979 but by then Bruce Bochte represented the M’s when they hosted the All Star Game (and he got an All Star Card.)

Meyer took his left handed bat to Oakland in 1982 but made little impact. He bounced around the minors for a while before fading into obscurity and into my shoebox in the form of this card.

He hit homers, drove in 90 runs and had an average that was above .270. In 1977 that was eye popping and what teams wanted. Today we understand players value more.

But do not get overly confident. Future generations will look at how we evaluate players and find us to be primitive and unaware of factors that they will see as common sense.

Maybe future baseball experts will look at Dan Meyer and see him as an under appreciated player.

Maybe Kellogg’s was on to something.