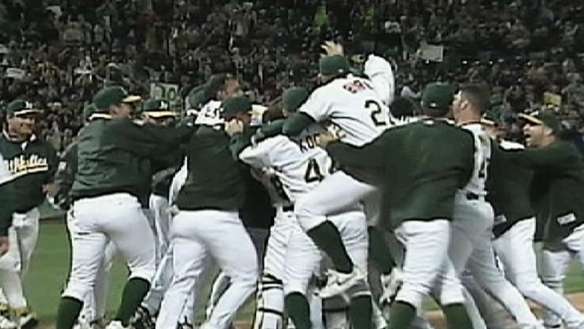 In the latest episode of The Teams That Should Have Won, I cover the Oakland A’s.

There are a lot of A’s teams that frustrated their fan base over the years. But only the 2002 A’s could have given their fans a Hollywood Ending… literally!

Cue “The Show” on this episode of The Sully Baseball Daily Podcast.

END_OF_DOCUMENT_TOKEN_TO_BE_REPLACED

With all of the super hero movies being made these days (it seems like they come out every hour on the hour) I started thinking about Dave Winfield and the effect he had on me as a kid.

There is no other way to say it. When your pal Sully was about 7 years old and really just beginning to understand baseball and how to follow it, Dave Winfield was the equivalent of a super hero.

Not a lot of San Diego Padres were in the Kellogg’s 3-D All Stars and at the time, I was living in New England. San Diego was a long way away and we didn’t get to see many National League games in the suburbs of Boston.

So all I knew REALLY about Dave Winfield was from his baseball cards. And an element of his background became a never ending source of fascination for me.

On October 3, 1951, the same day Bobby Thomson hit his “Shot Heard Round The World”, Dave Winfield was born in Minneapolis. Right there it seems like a super hero origin story.

Again, superhero stuff. He was so good that 4 teams drafted him. I am still looking for confirmation, but I heard a rumor that the St. Louis Blues of the NHL drafted him too. *

When I read that as a kid, that blew my mind. He was good enough to play any sport. And one other thing made me grab my 7 year old temples and yell “WHAT?”

When he went to the the Padres, he skipped the minor leagues. He was so good he went right to the majors.

I had a similar reaction to Bob Horner when I read that was his fate. But Winfield was a little more special. The NBA nor the NFL were interested in Horner. In 1973 he made his debut at age 21.

From then on, elite stats were the standard of Winfield. Lots of homers, Gold Gloves and a high average could be written in ink. When he moved to the Yankees, suddenly I got to see him in person (or on TV) on a regular basis.

I am no Yankee fan. But watching him play made me respect him and be amazed how many big hits he would pile up.

Naturally he made it into the crosshairs of George Steinbrenner and the whole bizarre Howie Spira plot line was just surreal. Basically, Steinbrenner hated Winfield so much because they weren’t winning the World Series that he hired a goon with mob ties money to find dirt on Winfield.

Perhaps he could have kept some of his young players like Fred McGriff, Willie McGee and Doug Drabek instead of hiring mob strong arm men and they could have won a World Series or two. But I digress.

The Yankee days ended midway through the 1990 season as he was dumped to the Angels. Finally in 1992, he won his first and only World Series title in Toronto. He of course got the game winning hit in the Game 6 clincher. He went home to Minnesota to get his 3,000th hit and finished his career with the Indians in 1995.

He was a member of the 3000 hit and 400 homer club. He began playing before I started following baseball and wrapped up his career post strike and after I graduated from college.

Dave Winfield’s career stretched a long way in my baseball loving life. He seemed super human from the start. In my mind, he never dipped below that level.