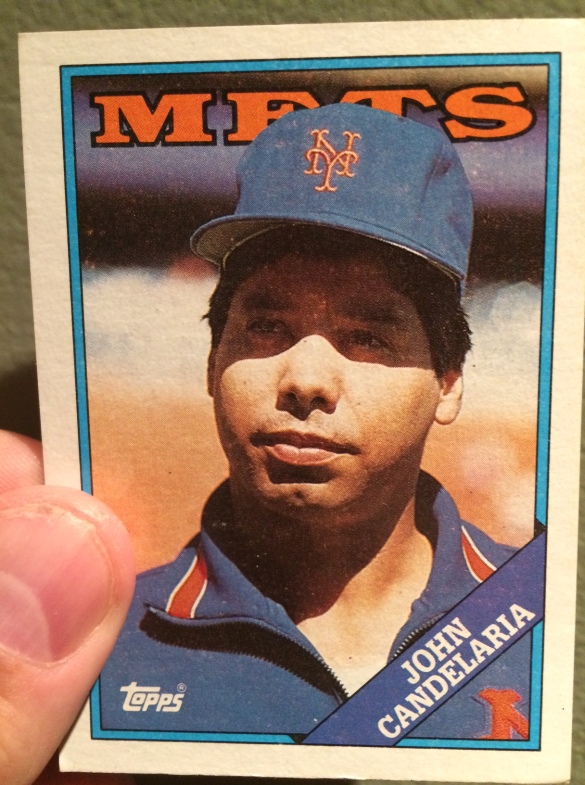 John Candelaria had a cool late 1970’s New York quality to him. When he was in his prime, it was almost a waste to have him in Pittsburgh because he seemed to belong in New York.

He was born in Brooklyn, grew up in Flatbush and grew up going to Yankee games. He attended LaSalle Academy in Manhattan where the 6 foot 7 inch Candelaria was a basketball star.

Alas the chance for the young tall native New Yorker with the Portugese name starring for a New York team was gone.

What was New York’s loss was Pittsburgh’s gain. The Candy Man shot through the Pirate’s farm system and made his big league debut with the 1975 NL East champs. He started in the NLCS against the Big Red Machine and dazzled them. He pitched into the 8th, striking out 14 and walking just 2. He got a no decision as the Reds went on to clinch the pennant in extra innings, but Candelaria made his mark.

In 1976, he threw a no hitter against a strong Los Angeles Dodgers lineup. By 1977, he was one of the elite pitchers in the National League. Candelaria made the All Star team. The game was played in New York where he looked like a combination of Al Pacino and Freddie Prinze. Man, he would have been a star there!

In 1979, the Pirates returned to the postseason. With Pittsburgh down 3-2 in the World Series and heading to Baltimore, Candelaria faced off against future Hall of Famer Jim Palmer and was up for the challenge.

Facing elimination, he threw 6 shutout innings, scattering 6 hits and walking none. Kent Tekulve nailed down the 4-0 win and the series was tied. The Bucs would win Game 7 and The Candy Man got his ring.

Save for an injury plagued 1981, Candelaria remained a reliable starter for the Pirates between 1980 and 1984 as the team’s fortunes began to fade. After the 1984 season, tragedy struck his family when his son died in a swimming pool accident.

In 1985, still recovering from the shock of his son’s death, he clashed with management who sent him to the bullpen. By mid season, he was dealt to the Angels. Candelaria was effective in Anaheim, helping them win the AL West in 1986 and winning Game 3 of the ALCS. He was pounded for 7 unearned runs in Game 7 however and the dreams of a California pennant went with the loss.

In 1987, Candelaria and the Angels both had disappointing years. The Angels could not take control over a very weak AL West and the Candy Man’s ERA soared to 4.71.

Meanwhile the defending World Champion Mets saw their once vaunted starting rotation depleted with injuries and drug suspensions. With the division still within reach in September but the number of capable arms dwindling, the Mets made a rare “post trade deadline” trade. They sent a pair of minor leaguers to California to bring Candelaria back home to New York.

With a staff that included Gooden, Darling, Ojeda, Fernandez and Aguilera as well as a young David Cone, it was odd seeing Candelaria in a Mets uniform.

His first game, he got clobbered, allowing 5 runs in 1 1/3 innings against his former team, the Pirates.

He pitched well in his other two Mets starts, winning both games and allowing 3 runs in 11 innings. But it was too little too late as the Cardinals went on to win the Division and eventually the National League Pennant.

The Mets did not offer him a contract for 1988 but the Yankees did and he wound up winning 13 games for managers Billy Martin and Lou Pinella.

In the end, he wound up playing for BOTH New York teams… just well after his prime.

In his final 5 seasons, he bounced around between the Yankees, Expos, Twins, Blue Jays, Dodgers and finally back with the Pirates where he finished his career as a left handed reliever.

He had a 19 year career with post season glory and individual accolades. The Candy Man is still a fan favorite for Pirate fans. But he just had the look and feel of a New York star of the 1970’s.